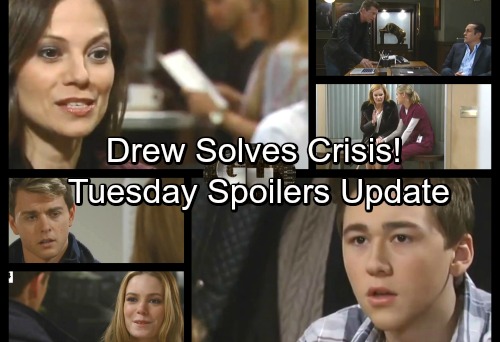 General Hospital (GH) spoilers for Tuesday, January 16, tease that Jason (Steve Burton) will get annoyed by his lack of progress. He’ll have a hard time putting the rest of the puzzle together, but Sonny (Maurice Benard) will think everything’s going to work out. Their mission is heating up and it won’t be long until they discover who’s behind the email address.

During a pep talk, Sonny will promise Jason that they’ll find Faison’s (Anders Hove) son. He’ll suggest that can deliver exactly what their enemy wants. Based on all the obvious clues, Peter August (Wes Ramsey) must be the person Sonny and Jason are looking for. He’ll have to face the music eventually.

Meanwhile, Josslyn (Eden McCoy) will also have some music to face! Carly (Laura Wright) will corner her daughter and ask about that box of condoms. Of course, it’s possible things aren’t exactly as they seem. Joss and Oscar (Garren Stitt) never actually mentioned sex during their latest chat. Perhaps they’ve been talking about a big dance number for the ball or something along those lines.

As for the condom box, this might tie in with the bully Oscar (Garren Stitt) mentioned. This could be the dumb jock’s attempt to stir up trouble. Regardless, Josslyn will get an earful until she can explain. Likewise, Oscar will tackle Kim’s (Tamara Braun) tough questions. She’ll want to talk about sex, so Oscar will find himself on the hot seat.

Drew (Billy Miller) will have to deal with some uncomfortable moments when he’s brought into this. However, he might side with Oscar’s potential side of the story. After all, Oscar asked Drew to teach him to fight because of a bully. Whatever the case, everybody will get the support they need. Even if the teens are suddenly sex crazy, some advice will surely set them straight.

At GH, Ava (Maura West) will gush about her final procedure. She’ll be ecstatic about her face finally getting back to normal. Kiki (Haley Erin) will battle some anxiety, but she’ll try to be happy for her mom. Ava will certainly think this is the solution to all her problems.

Other General Hospital spoilers say Michael (Chad Duell) and Nelle (Chloe Lanier) will have a disagreement. He’ll have a problem with a choice she makes, but Nelle will stand her ground. Fortunately, Michael will make an effort to keep the peace. He’ll go along with Nelle’s suggestion and focus on their kid.

Nelle will also ask if next Monday works for Michael. They might be setting up an appointment for the paternity test. That’s something Michael would undoubtedly like to get out of the way. It should be interesting to see if the test results back Nelle up.

It sounds like some great drama’s coming up in Port Charles. We’ll give you updates as other General Hospital news emerges. Stick with ABC’s GH and don’t forget to check CDL often for the latest General Hospital spoilers, updates and news.