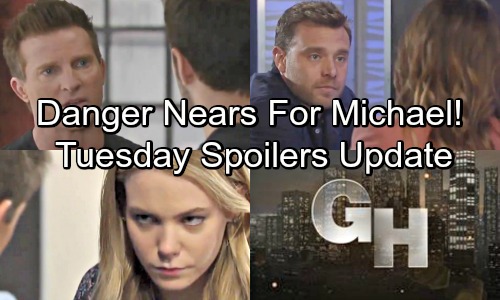 General Hospital (GH) spoilers for Tuesday, July 24, tease that Michael (Chad Duell) will inch toward danger. Nelle (Chloe Lanier) will give her new hubby a crazy stare and suggest that she has needs. If Michael can’t fulfill them, Nelle may have to do something about it. He’ll question her about what she means, but Nelle will remain cryptic. She can’t tell Michael that she plans to have him killed!

Of course, Michael already has a hunch about it. In fact, that’s what he’s counting on. Michael and Chase (Josh Swickard) are hoping Nelle will fall right into their trap, which is definitely the way things are headed. Nevertheless, Jason (Steve Burton) will have trouble believing that the guys can pull this off.

During a conversation with Chase, Jason will offer a stern warning. He’ll contend that if Michael doesn’t survive this plot, Nelle’s destruction won’t matter. Michael’s safety is obviously the priority for Jason, so Chase will promise that his plan’s a sure thing. He’ll just want Jason to have a little faith, but he needs to take his confidence down a notch. Nelle may be craftier than Chase and Michael realize.

At GH, Nina (Michelle Stafford) will approach Peter (Wes Ramsey) in his hospital bed. She’ll want to know why he claimed Liesl (Kathleen Gati) acted alone. Peter might argue that Dr. O started this mess and simply dragged Nina into it. She showed far more compassion than Liesl, so Peter may suggest he wanted to return the favor.

Other General Hospital spoilers say Margaux (Elizabeth Hendrickson) will have another talk with Drew (Billy Miller). This time they may discuss the envelope Margaux spotted in her hotel room. It had Drew’s name on it, but nothing was inside.

Drew might bring up the flash drive and spark some questions for Margaux. However, she’ll put all this on hold soon enough. A DA’s work is never done! Margaux may have to handle the Liesl and Peter mayhem right away. As for Drew, let’s hope he figures out the flash drive is still close by. It’s just waiting to be discovered in the Metro Court’s lost and found box.

In the meantime, Griffin (Matt Cohen) will realize Ava’s (Maura West) uncomfortable. She’ll keep changing the subject, so Griffin will push for her reasons. If they’re chatting about Carly (Laura Wright), Ava will want to protect herself. She knows Nelle’s manipulation put Carly in Ferncliff. Ava also kept the blanket that could’ve corroborated Carly’s story, so there’s a lot at stake.

Elsewhere, Kiki (Haley Erin) will speak with Alexis (Nancy Lee Grahn) about her case. She’ll wonder if she really has a shot of winning. General Hospital spoilers say Alexis may not want to give too much hope. There isn’t any proof, so it could be tough to bring Dr. Bensch (James DePaiva) down.

At the same time, Alexis really knows her way around a courtroom. She’ll undoubtedly vow to give this case her all. We’ll give you updates as other GH news comes in. Stick with the ABC soap and don’t forget to check CDL often for the latest General Hospital spoilers, updates and news.