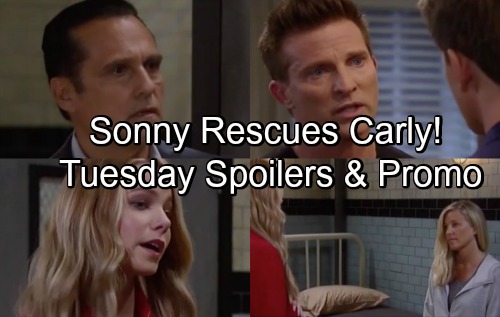 General Hospital (GH) spoilers for Tuesday, July 3, tease that Franco’s (Roger Howarth) in for a shock. When he gets home, he’ll meet Liz’s (Rebecca Herbst) old friend and notice the obvious difference from her stories. Terry is now a woman, so Franco will take a moment to wrap his head around that. He was worried about Terry posing a threat to his relationship, so he’ll admit he’s relieved.

There should still be a few other obstacles between now and the “Friz” wedding, but it looks like Terry won’t be one of them. Meanwhile, Kim (Tamara Braun) will ask Julian (William deVry) an uncomfortable question. She’ll wonder if it’s hard for him to be with her because of what she did to Drew (Billy Miller). 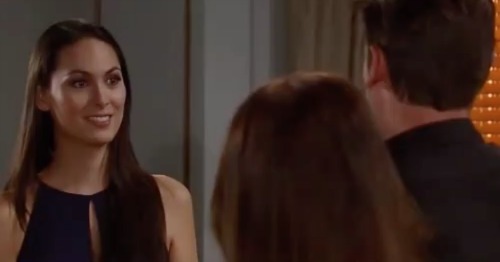 Kim kept Drew in the dark on Oscar (Garren Stitt) for many years, so she may feel like that’s a problem for Julian. Julian missed out on a lot of Lucas’ (Ryan Carnes) life as well, but it was a completely different situation. He may assure Kim that this doesn’t stir up any old issues for him. They were drawn to each other because of their desire to move forward and that’s what they’ll continue to do.

Other General Hospital spoilers say Lucas will ask Sam (Kelly Monaco) for a favor. After she asks why he looks so serious, Lucas will admit that he needs her help. He’ll suggest that this request is for Brad (Ryan Carnes) as well.

Since Lucas and Brad can only think about their baby right now, the adoption has to come into play here. It’s possible they changed their minds and want Sam to investigate the birth mom. However, that could be awfully risky. There’s a chance they want to make sure Julian (William deVry) stays out of this instead. They might want Sam as an insurance policy for keeping Alexis’ (Nancy Lee Grahn) mouth shut.

Whatever the case, Sam will assist Brad and Lucas if she can. Across town, Jason (Steve Burton) will try to figure out Michael’s (Chad Duell) thought process. He’ll wonder why Michael intends to go as far as marrying Nelle (Chloe Lanier) to trap her. Michael will insist that he has to do whatever it takes for his family. He’ll just want to free Carly (Laura Wright) and make things right.

At Ferncliff, GH spoilers state that Nelle will taunt Carly with her big news. She’ll drop the engagement bomb and gloat, but Sonny’s (Maurice Benard) arrival will put a stop to it. He’ll unleash his fury and urge Nelle to scram, so Carly will be saved from more misery for now.

General Hospital fans won’t want to miss all the drama ahead. We’ll give you updates as other GH details emerge. Stay tuned to the ABC soap and don’t forget to check CDL often for the latest General Hospital spoilers, updates and news.