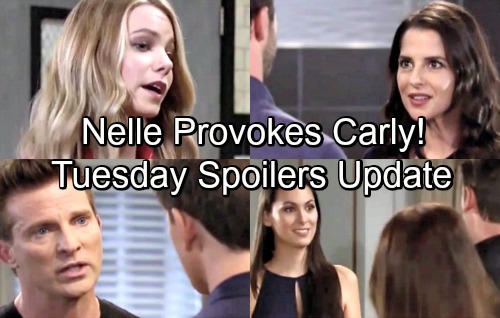 General Hospital (GH) spoilers update for Tuesday, July 3, tease that Nelle (Chloe Lanier) will stir up plenty of trouble at Ferncliff. She just popped in for a conversation with Carly (Laura Wright) and her main goal is adding to her enemy’s misery. Nelle will soon deliver the engagement shocker and pretend this will bring the family together. She knows the news will only enrage Carly, but she’ll love every minute of it.

Carly will do her best to control her anger, but it should be difficult with Nelle around. Just the sight of her is enough to drive Carly up the wall. Luckily, Sonny (Maurice Benard) will make his way over and toss Nelle out. Once the pregnant manipulator heads home, Sonny will promise that he’s going to score Carly’s freedom. He’ll reiterate that Nelle’s takedown is coming, so Carly will get her revenge.

Elsewhere, Michael (Chad Duell) will argue with a concerned Jason (Steve Burton). To destroy his “baby mama,” Michael’s carrying out a wedding charade. Jason will ask why he’s marrying Nelle, but Michael probably won’t take it that far if he can help it. Then again, a marriage and annulment wouldn’t be out of the question. Whatever it takes for Carly’s sake!

Other General Hospital spoilers say Lucas (Ryan Carnes) will track Sam (Kelly Monaco) down and ask for her help. She’ll assume this is serious business, so she’ll listen up and prepare to hear his problem. However, it looks like Lucas will actually have a touching request. Word has it he’ll want Sam to be his baby’s godmother, so that should warm her heart.

Over with Kim (Tamara Braun) and Julian (William deVry), they’ll talk about some Drew (Billy Miller) issues. After Kim mentions what she did to her ex, she’ll try to get a sense of how Julian feels about it. Kim kept Oscar (Garren Stitt) a secret from Drew, so that might be the cause of her concerns.

Of course, Julian knows they both have baggage and his is arguably much heavier than Kim’s. They’ll push past any lingering obstacles and keep this romance going strong. Across town, Liz (Rebecca Herbst) and Terry (Cassandra James) will laugh over fond memories. Once Franco (Roger Howarth) arrives, he’ll be stunned to learn this is Liz’s old friend. This is not the Terry he was expecting at all!

Terry will briefly mention her transition and clear a few things up for Franco. GH spoilers say Franco’s surprise will turn to relief. He’ll just be happy that his marriage plans are still intact. Franco doesn’t want any guys coming back around to compete for Liz’s heart, so he’ll welcome Terry’s arrival.

It sounds like General Hospital’s got another exciting episode in store. We’ll give you updates as other GH info comes in. Stay tuned to the ABC soap and don’t forget to check CDL often for the latest General Hospital spoilers, updates and news.