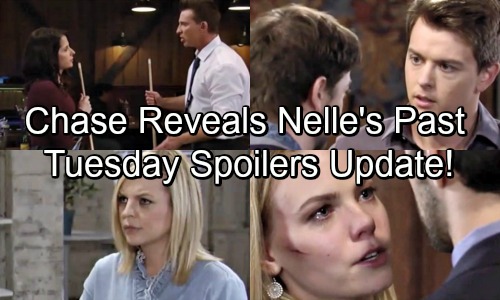 General Hospital (GH) spoilers update for Tuesday, June 12, tease that Nina (Michelle Stafford) will get a shocking phone call. During her conversation with Maxie (Kirsten Storms), she’ll be called back to the cabin to help Liesl (Kathleen Gati). Nina will offer some bogus reasons for leaving in a rush. When Maxie expresses concern, Nina will insist that she’s got everything under control.

However, that won’t stop Maxie from wondering what’s up. She can tell Nina’s exhibiting some strange behavior, so she might seek some answers soon. That could certainly throw Nina and Dr. O for a loop! In the meantime, it looks like Peter’s (Wes Ramsey) getaway plan may be thwarted. General Hospital spoilers say he’ll seem fearful as he cries out on the bed.

Nina may remain torn about this mess. She loathes Peter, but it’s also hard to watch him suffer. This scheme is getting out of hand, so Nina really needs to figure something out. Elsewhere, Michael (Chad Duell) will want the scoop from Spinelli (Bradford Anderson). He’s been anxiously awaiting evidence to destroy Nelle (Chloe Lanier), so he’ll hope Spin’s ready to deliver.

Fortunately, Spinelli will indeed have some stunning information. He’ll think he’s found proof they need to expose Nelle for the little snake she is. Over with Chase (Josh Swickard), he’ll get in Nelle’s face and stir up the past. He just took Nelle by surprise and referred to her as “Janelle.” Chase and Nelle go way back, so it should be interesting to hear them rehash their history.

On Monday’s GH episode, Chase dropped a hint while chatting with Maxie. He mentioned that the world is full of liars, but she suspected they weren’t talking about Peter anymore. It appears Chase was actually mulling over Nelle and her deception. He’s most likely certain that Nelle killed Zack or was behind some other awful crime.

Even Chase himself could’ve been Nelle’s target. He might’ve been just like Michael a few years back. Of course, Chase probably thinks Nelle’s lying about Carly’s (Laura Wright) shove as well. Why hasn’t he come forward with his secrets yet? Does Nelle have dirt on him? Regardless, Nelle will suggest that Chase is a stalker. She’ll be shaking in her boots, but she’ll try not to show it.

Over with Drew (Billy Miller) and Kim (Tamara Braun), they’ll connect as parents and friends. General Hospital spoilers say their bond will grow much stronger. A similar situation will play out for Jason (Steve Burton) and Sam (Kelly Monaco). At The Floating Rib, they’ll play pool as they talk about Carly’s dilemma. Sam will definitely want to be someone Jason can lean on.

Jason will feel like Nelle needs to pay for what she’s done. He’ll snarl that she’s the one who should be locked up, not Carly. With any luck, Jason can get his bestie out and focus on bringing Nelle down. We’ll give you updates as other GH news comes in. Stick with the ABC soap and don’t forget to check CDL often for the latest General Hospital spoilers, updates and news.