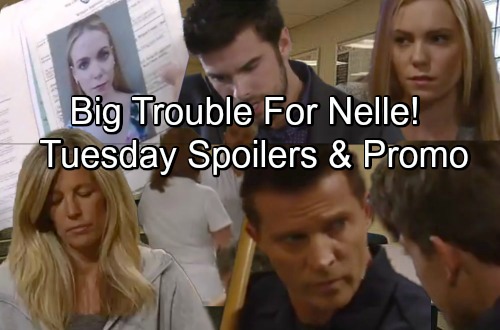 General Hospital (GH) spoilers for Tuesday, June 19, tease that Carly (Laura Wright) will be on her best behavior. She’ll try to be polite and avoid provoking Mary Pat (Patricia Bethune) at Ferncliff. Naturally, Mary Pat will grow suspicious of Carly’s cheerful attitude. She’ll tell Rupert that there’s something different about their new patient this morning.

Mary Pat will be keeping a close eye on Carly, so she’ll have to be careful. That’s especially true since Jason’s (Steve Burton) lurking. GH fans know he gave Mary Pat a phony resume and got hired as a janitor. Jason will be able to watch out for his friend, but he’ll also run the risk of getting caught. General Hospital spoilers say Carly and Jason will definitely face some close calls in the coming episodes.

Meanwhile, Finn (Michael Easton) and Anna (Finola Hughes) will discuss what’s next. It isn’t easy to navigate the ups and downs of a relationship, but they’ll have high hopes for the future. Finn will note that they’ve made it this far, so they can figure the rest out as well.

Other General Hospital spoilers say Chase (Josh Swickard) will take a look at Nelle’s (Chloe Lanier) file. As he gazes at it, he’ll call someone up and reveal that the trail just got a little warmer. Chase may get in touch with an old cop buddy from Florida. He could provide updates on Nelle’s latest drama and contend that she’s going down this time.

At the Floating Rib, Michael (Chad Duell) will leave Nelle a bit rattled. He’ll suggest that at this point, there are no more secrets between them. Of course, Michael knows that’s not true. He’ll just be hoping to unsettle Nelle and perhaps spark some mistakes.

General Hospital spoilers state that Nelle will reflect on her shady history. Between her recent encounter with Chase and the comments from Michael, Nelle will definitely be concerned. She’ll fear that her past could come back to haunt her, so she’ll scramble to cover any remaining tracks.

Over with Alexis (Nancy Lee Grahn), she’ll open up to Sam (Kelly Monaco). Alexis may mention her problem with men and how Kevin’s (Jon Lindstrom) helping her find the source of her struggles. Sam will insist that now all Alexis has to do is fix it. She’ll hope her mom can break the cycle of bad choices in her love life.

At GH, Kevin will have a surprise for Franco (Roger Howarth). He’ll note that he’d like to offer a wedding gift. Franco will seem somewhat puzzled, so he’ll wonder what the doc has in store. Knowing Kevin, it’ll probably be something that pushes Franco to think and dive deeper in his relationship. Kevin’s all about making couples ask the hard questions.

Nearby, Liz will have a chat with Scott (Kin Shriner). She’ll admit she just wants a simple, stress-free wedding, but Franco’s undermining that plan slightly. He keeps going behind Liz’s back, so he could be setting himself up for trouble.

Liz is clearly anxious about inviting her family, but will she change her mind down the road? Let’s hope this story ends with some happy reconnections. We’ll keep you posted as other GH news comes in. Stay tuned to the ABC soap and don’t forget to check CDL often for the latest General Hospital spoilers, updates and news.