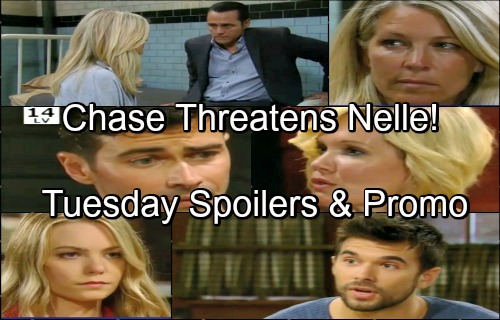 General Hospital (GH) spoilers for Tuesday, June 26, tease that Ava (Maura West) will fume over Dr. Bensch’s (James DePaiva) actions. Griffin (Matt Cohen) will think she just needs to stick to the plan and let Kiki (Haley Erin) handle this. However, Ava won’t be content to sit back and do nothing. She’ll wonder aloud how far she’d go to avenge her daughter, so Griffin should be concerned.

Meanwhile, Franco (Roger Howarth) will hate that it’s too late to help Kiki. He’ll wish he could’ve intervened before Dr. Bensch crossed the line, but what’s done is done. Now that Kiki’s fighting back, Liz (Rebecca Herbst) may suggest that Franco should simply offer support. Just being there for Kiki would be helpful, but Franco may find it difficult to steer clear of dirty Dr. Bensch.

Across town it looks like Alexis (Nancy Lee Grahn) will serve Julian (William deVry) with a subpoena. She may want his help with bringing Dr. Bensch down, but she’ll end up taking herself off the case pretty soon. That may be what Kiki’s phone call is about on Tuesday. She’ll be summoned somewhere for a chat, so maybe Alexis will break the bad news.

Other General Hospital spoilers say Francesca (Celesta DeAstis) will pass along a warning. She’ll run into Michael (Chad Duell) and insist that there’s something he should know. There’s a chance this involves Dr. Bensch since Francesca was also harassed and Michael’s on the board.

However, Nelle (Chloe Lanier) could just as easily be involved here. Francesca may have found out about more of Nelle’s sneakiness. If she’s up to something else, that’d certainly warrant a warning. Whatever the case, Michael will be left with a lot to mull over.

Elsewhere, Chase (Josh Swickard) will sit down for a tense conversation with Nelle. He’ll recap how she reported him for inappropriate behavior and derailed the case against her. Chase will suggest that Nelle must’ve thought she dodged a bullet. He’ll make it clear that she was mistaken about that. The bullet’s back and it’s headed straight in Nelle’s direction!

At Ferncliff, GH fans can expect a nice surprise for Carly (Laura Wright). General Hospital spoilers say Sonny (Maurice Benard) will show up to provide reassurance. Jason’s (Steve Burton) been kicked out of the facility, so Carly will be upset about going it alone. She’ll be glad to have Sonny around, even if it’s just for a few minutes.

Sonny will promise that Nelle’s going to pay the price for what she’s done. He’ll vow to get Carly out of there and help her get the revenge she deserves. It sounds like some great drama’s ahead. We’ll give you updates as other GH details emerge. Stay tuned to the ABC soap and don’t forget to check CDL often for the latest General Hospital spoilers, updates and news.