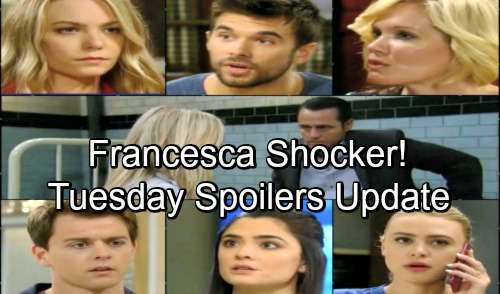 General Hospital (GH) spoilers update for Tuesday, June 26, tease that Carly (Laura Wright) will feel like her world’s crashing down again. Mary Pat (Patricia Bethune) threw Jason (Steve Burton) out of Ferncliff, so she’ll gloat to Carly and make her even more miserable than before. Thankfully, another source of support’s coming. Sonny (Maurice Benard) will arrive for a visit and he won’t let anyone turn him away.

Once Sonny sets Mary Pat straight, he’ll approach Carly and try to help her cope. Sonny knows Carly’s predicament isn’t fair, but he’ll promise Nelle’s (Chloe Lanier) going to get hers eventually. Just as soon as Carly scores her freedom, she can watch Nelle’s downfall and love every minute of it.

Speaking of Nelle, she’ll grow anxious in Tuesday’s new GH episode, June 26. During a confrontation with Chase (Josh Swickard), Nelle will face a warning about what’s ahead. Chase will assure Nelle that the bullet she dodged is coming back around. He won’t want her to think she’s going to get off scot-free forever. Even if Chase can’t take Nelle down for Zach’s murder, there are other ways of making sure justice is served.

Francesca recently admitted that she’s also Dr. Bensch’s (James DePaiva) victim. She filled Kiki (Hayley Erin) in, but it’s possible she’ll tell Michael as well. Since Michael’s on the board at General Hospital, there might be something he can do.

Then again, Francesca may have stumbled across some Nelle info. After all, most of Michael’s scenes are tied to his “baby mama” these days! No matter what Francesca divulges, Michael will listen up and do his best to handle it.

Meanwhile, Kiki will speak with someone over the phone. Once she hears what’s happening, she’ll urge the person on the other end to stay put. Kiki will rush over for additional updates, so this is probably about her civil suit.

We know Alexis (Nancy Lee Grahn) will be taking herself off Kiki’s case in the near future. It’s possible this call will relate to that. However, it seems Alexis will find time to serve Julian (William DeVry) a subpoena first. General Hospital spoilers say we’ll get some tense “Julexis” scenes, so stay tuned.

Over with Franco (Roger Howarth), he’ll feel bad for not doing more to assist Kiki. Franco will think it’s too late, but Liz (Rebecca Herbst) may argue that Kiki still needs her loved ones. They can’t erase what Dr. Bensch did, but helping Kiki now matters almost as much.

How far will Ava go to settle the score? If Griffin can’t curb her vengeful craving, danger could be looming. We’ll keep you posted as other GH details emerge. Stick with the ABC soap and don’t forget to check CDL often for the latest General Hospital spoilers, updates and news.