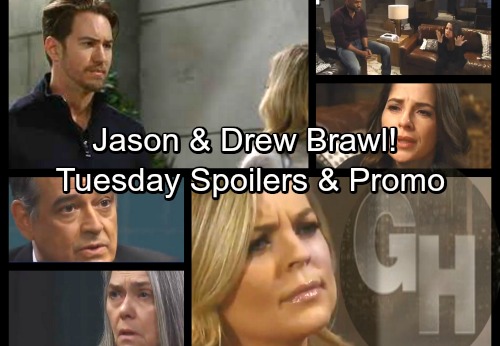 General Hospital (GH) spoilers for Tuesday, March 27, tease that Curtis (Donnell Turner) will sit down for a chat with Sam (Kelly Monaco). He’ll suggest that he wanted to come by and get her side of the story. Curtis knows Drew (Billy Miller) is hurting, so he’ll hope to hear that it’s not too late to save their marriage.

The tears will start flowing again as Sam explains the situation. She’ll just wish that Drew hadn’t walked out on her. Sam will insist that they still have so much to talk about. She might wonder if Curtis can get Drew back home to discuss this.

However, Drew will probably have to make that decision on his own. He still needs time to process Sam’s feelings for Jason (Steve Burton). Speaking of Jason, he just ran into Drew and the tension’s about to erupt. General Hospital spoilers say a fierce faceoff is on the way. Jason will try to be understanding, but Drew will push him to his limit.

As this fight heats up, Drew and Jason will finally come to blows. This brawl’s been building for a while now, so it should actually be pretty satisfying for GH fans! Meanwhile, Franco (Roger Howarth) will hope he can get some answers soon. He’ll want Betsy (Deborah Strang) to fill him in on those childhood memories he can’t quite grasp.

Franco will speak to Liz (Rebecca Herbst) about his goal, but he won’t be allowed to see Betsy just yet. Jordan (Vinessa Antoine) will tell Dante (Dominic Zamprogna) she wants to try one thing before she lets Franco have a turn. She’ll send Kevin (Jon Lindstrom) in first to see if he can get a clear picture of what Betsy remembers.

During their chat, Kevin will push Betsy for an explanation. He’ll ask what she did that can’t be forgiven. Betsy may not be willing to divulge much to Kevin. She was adamant about only telling Franco and Drew what happened. Nevertheless, it’s obvious that Jim (Greg Evigan) abused the boys in one way or another. Betsy was most likely just too scared to come clean before now.

Other General Hospital spoilers say Peter (Wes Ramsey) will surprise Maxie (Kirsten Storms). She’ll look confused when Peter announces that he has something for her. Peter recently contacted the publisher about The Severed Branch. It appears he cooked up a donation plan for Maxie’s baby. Peter was definitely intrigued when he heard Nathan (Ryan Paevey) set up a trust before his death.

Will Peter give Maxie a check? That seems risky since it could possibly leave a trail for Spinelli (Bradford Anderson) to track. Elsewhere, Nina (Michelle Stafford) will talk to Valentin (James Patrick Stuart) about skeletons in the closet of Wyndemere. She’ll even think she’s one, so Valentin will have to offer some reassurance on Tuesday.

Of course, Nina doesn’t realize that Valentin’s keeping some dangerous secrets. Will he lose her when his partnership with Peter eventually blows up? We’ll give you updates as other GH news comes in. Stick with the ABC soap and don’t forget to check CDL often for the latest General Hospital spoilers, updates and news.