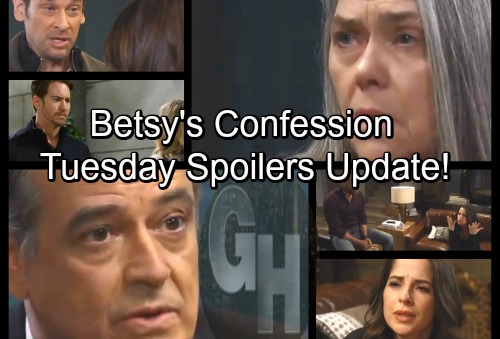 General Hospital (GH) spoilers for Tuesday, March 27, tease that Peter (Wes Ramsey) will decide to give Maxie (Kirsten Storms) something special. He’ll catch her off guard when he reveals his gift. Peter was quite curious when he heard about the trust Nathan (Ryan Paevey) set up for his child. After Maxie left, Peter made a phone call and suggested that he was ready to publish his manuscript.

It looks like Peter wants to pitch in by handing over some money for the baby. Of course, whipping out a check may not be the best idea. Maxie may struggle to accept it and there’s a chance that it could help someone make a connection. Peter doesn’t want to do anything that would jeopardize his secrets. Nevertheless, that’s exactly what he’ll do if he leaves a trail of funds to follow.

Elsewhere, Nina (Michelle Stafford) will puzzle Valentin (James Patrick Stuart) when she starts talking about skeletons in the closet of Wyndemere. Valentin just won’t understand what Nina means. He’ll probably be more concerned about keeping his alliance with Peter under wraps! However, Nina will explain her point of view and it could lead to some interesting developments.

Other General Hospital spoilers say Sam (Kelly Monaco) will battle heartache as she opens up to Curtis (Donnell Turner). She’ll hate that her news devastated Drew (Billy Miller), she didn’t know what else to do. Sam feels like staying silent about her love for Jason (Steve Burton) would’ve meant living a lie.

Curtis will understand that, but he’ll still try to look out for his pal. He might encourage Sam to hang in there and wait for Drew to cool off. Curtis realizes there are deep feelings between Sam and Drew. He won’t think they should throw away the life they’ve built together.

Sam doesn’t seem ready to give up on their marriage, but she needs Drew to talk to her. So much was left unsaid when Drew walked out. Let’s hope they can have another crucial conversation in time.

For now, Drew will be busy facing off with Jason. Their latest encounter isn’t going to end well. When Drew starts running his mouth, Jason will decide he’s had enough. Both twins have had some tough breaks, so this situation isn’t anyone’s fault. Jason will get tired of being blamed, so he’ll fire back when Drew lashes out. Some punches will be thrown, so stay tuned for more GH drama.

Across town, Franco (Roger Howarth) will be eager to grill Betsy (Deborah Strang). He can’t stop dwelling on all his childhood torment. Franco will talk to Liz (Rebecca Herbst) about his plan to get to the bottom of all this.

Before Franco’s allowed in, Jordan (Vinessa Antoine) will let Kevin (Jon Lindstrom) have a go at Betsy. After Betsy mentions her unforgivable act, Kevin will push her to clarify. Will Betsy spill anything? She recently vowed to tell only Drew and Franco, so she may be a tough nut to crack.

Still, it’s easy to see that Betsy’s been covering for creepy Jim Harvey (Greg Evigan). It won’t be long until the ugly truth comes out. We’ll give you updates as other General Hospital details emerge. Stick with ABC’s GH and don’t forget to check CDL often for the latest General Hospital spoilers, updates and news.