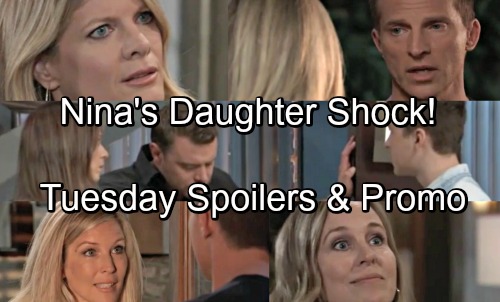 General Hospital (GH) spoilers for Tuesday, October 2, tease that Laura (Genie Francis) will deliver some stunning news. Her return home certainly caught Ryan (Jon Lindstrom) off guard, so he’ll scramble to keep up his Kevin (Jon Lindstrom) charade. Laura will notice when “Kevin” isn’t quite himself, but she’ll brush off her concerns for now. As for Ryan, he’ll just want rid of her!

Ryan will wonder how long Laura’s in town for, but her answer won’t be what he wants to hear. Laura will announce that she’s home forever, so Ryan will have to reevaluate his devious plans. At Crimson, Valentin (James Patrick Stuart) will insist that Nina’s (Michelle Stafford) child is alive. She’ll suspect this is some plot to win her over, but Valentin will promise that he’s got proof to back it up.

While Valentin shows off the DNA test results, Jordan (Briana Nicole Henry) will give Margaux (Elizabeth Hendrickson) a warning. She’ll insist that DA Dawson is way too close to the investigation. Jordan will worry that Margaux’s grudge will hurt the case in the end, but Margaux won’t think so. She’ll probably argue that her determination will work in their favor.

Other General Hospital spoilers say Chase (Josh Swickard) will set up an important meeting. At the police station, he’ll tell an officer to take a seat as Lulu (Emme Rylan) looks on. We know Valerie’s (Brytni Sarpy) hoping to become a detective soon. We also know Valerie will receive some big career updates on Tuesday’s new GH episode. It looks like she’ll be replacing Dante (Dominic Zamprogna) as Chase’s partner.

That would explain Lulu’s inclusion in this scene. Chase will probably give her the heads-up and suggest that Dante’s doing good work out there. GH fans can expect Lulu and Chase to bond on Tuesday, so could this be the start of a new romance? They won’t be getting together anytime soon, but this could definitely be a step in that direction.

Over with Oscar (Garren Stitt), he’ll take Jason’s (Steve Burton) advice and seek some answers. Oscar’s been kept in the dark on his condition for far too long, so he’ll want to hear all the facts. Kim (Tamara Braun) and Drew (Billy Miller) will explain the clinical trial, which could give Oscar more time. It also comes with risks, but they’ll try to convince Oscar that it’ll be worth it.

Unfortunately, General Hospital spoilers say Oscar will just have another meltdown. He’ll argue that the outcome’s the same no matter what. Oscar will shout that he’s still going to die, so he may not see the point of this experimental treatment.

Elsewhere, Carly (Laura Wright) and Jason will debate the gun situation. Mike (Max Gail) suddenly remembered that he tossed it in the river after moving the body. He was quite lucid when he recalled that info, so Carly will feel like Sonny’s (Maurice Benard) in the clear.

Jason, on the other hand, won’t be as sure. Even if he completely buys Mike’s claims, they still have Margaux’s vendetta to fret about. Jason knows that she’s not about to let this go, so they’d better be prepared for more drama. We’ll keep you posted as other GH details emerge. Stay tuned to the ABC soap and don’t forget to check CDL often for the latest General Hospital spoilers, updates and news.