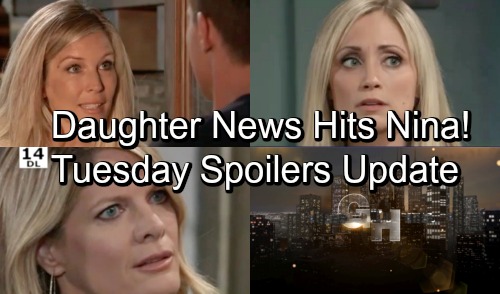 General Hospital (GH) spoilers for Tuesday, October 2, tease that Jason (Steve Burton) will disagree with Carly (Laura Wright). She’s feeling relieved thanks to Mike’s (Max Gail) recent revelation. He claims he dumped the gun in the river, so there’s no chance of it coming back to bite Sonny (Maurice Benard). That’s good enough for Carly, but Jason will still have major concerns.

Despite his reassurance, Mike’s memory could be playing tricks on him. Even if he’s got it right, they have to proceed with caution. Jason may think Margaux’s (Elizabeth Hendrickson) vendetta is their biggest problem. Now that she’s certain of Sonny’s involvement, there’s no way she’ll back down. Margaux intends to do whatever it takes to achieve justice.

Speaking of Margaux, she’ll defend her determination on Tuesday. Jordan (Briana Nicole Henry) will feel like Margaux’s too invested and that can only spell trouble. However, Margaux will insist that she’s an asset, not a liability. She’s the one person who’s truly committed to the investigation, so she’ll just want to help.

Meanwhile, Chase (Josh Swickard) and Lulu (Emme Rylan) will strengthen their friendship. He’ll include her in a crucial meeting, which may involve filling Dante’s (Dominic Zamprogna) spot. Chase still needs a new partner at the PCPD, so Valerie (Brytni Sarpy) would be a nice option. If all goes well, she’s set to become a detective soon.

Valerie will receive some huge career news in Tuesday’s episode. Will she get a promotion? Will Chase and Valerie be working together on cases? That sounds like a great plan since it’d get Valerie more involved in GH storylines.

Other General Hospital spoilers say Drew (Billy Miller) and Kim (Tamara Braun) will join forces. They’ll present a united front as Oscar (Garren Stitt) pummels them with tumor questions. Oscar will want to know how much time he has left, but Kim and Drew would rather talk about that clinical trial. They’ll do everything they can to get Oscar on board.

Of course, Oscar’s still reeling over his deadly diagnosis. When learns the treatment could rush him toward the grave sooner, he may not be keen on trying it. Oscar will feel like he’s going to die no matter what they do. His despair will break Drew and Kim’s hearts, but they’ll try to stay strong for their son.

Over with Valentin (James Patrick Stuart) and Nina (Michelle Stafford), they’ll discuss the daughter drama. Valentin will reveal that he’s been doing some digging. He’ll offer DNA proof that Nina’s child is alive, but she’ll struggle to trust him.

Fortunately, GH fans know Curtis (Donnell Turner) pitched in on this. Nina knows Curtis wouldn’t steer her in the wrong direction, especially about something that matters to her. Once the second DNA test backs up the first, Nina will realize she has to believe the evidence.

Finally, Laura (Genie Francis) will get a bit suspicious. Ryan’s (Jon Lindstrom) been doing a decent job of impersonating his brother, but can he fool Kevin’s (Jon Lindstrom) wife? She’ll definitely pick up on some differences, but the charade won’t fall apart just yet.

When Kevin realizes Laura’s back permanently, he’ll realize his scheme just got a lot more complicated. We’ll give you updates as other General Hospital details emerge. Stick with ABC’s GH and don’t forget to check CDL often for the latest General Hospital spoilers, updates and news.