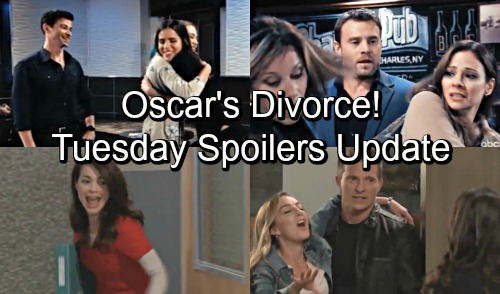 General Hospital (GH) spoilers for Tuesday, October 23, tease that Kristina’s (Lexi Ainsworth) downward spiral will continue. She’s been feeling pretty lost lately, so she made the mistake of calling Parker (Ashley Jones). Kristina needs to be moving forward, not looking back. Sadly, she just couldn’t help herself and now she’s sinking even lower than before.

Parker apparently bounced back from their breakup with ease. Meanwhile, Kristina’s still floundering in Port Charles. She’ll continue to drink on Tuesday, so Jason (Steve Burton) will find her completely plastered. Naturally, he’ll make sure Kristina gets home OK. Jason wouldn’t want to leave Sam’s (Kelly Monaco) little sis out there stumbling on the streets.

General Hospital spoilers say Sam will help Kristina get in bed and offer Jason her gratitude. She’ll be glad he’s always there when she needs him. Across town, Oscar (Garren Stitt) will deliver some huge news. He’ll let Drew (Billy Miller) and Kim (Tamara Braun) know that he’s divorcing them.

As his parents look on in shock, Oscar will explain the details of emancipation plans. He’ll feel unstoppable with Alexis (Nancy Lee Grahn) in his corner. At the Metro Court, Kiki (Hayley Erin) and Griffin (Matt Cohen) will spot Ava (Maura West). However, Kiki won’t think they should change their plans. She’ll insist that the only way to deal with her mother is to face her head-on.

Kiki will also meet Sasha (Sofia Mattsson) at some point. They’ll embrace happily as introductions are made. Naturally, Ava will grow curious. It won’t be long until she starts poking around and scores an admission from Nina (Michelle Stafford). GH spoilers say Nina will bring Ava up to speed. She’ll confess that her daughter survived and is now back in her life.

Sasha will think Griffin’s mighty fine, so Ava will take notice. She’ll decide she can use that to her advantage, which means a shady strategy’s brewing. Over with Liz (Rebecca Herbst), she’ll be at work when she discovers something alarming. Liz will gasp over what’s in front of her and dash off as she yells for help.

What will Liz find at GH? Could it be a seriously injured nurse – or worse, a corpse? Will it be someone else with a medical issue instead? Regardless, all eyes are on Ryan (Jon Lindstrom) right now. He’s bound to take deadly action eventually!

Speaking of Ryan, he’ll face more Laura (Genie Francis) drama on Tuesday. General Hospital spoilers say Laura will mention the list of women’s names. She found it on Kevin’s (Jon Lindstrom) desk, so she’ll expect an explanation. Ryan will provide one to satisfy Laura, but she’ll still have major concerns.

Laura will argue that “Kevin’s” struggling with old Ryan wounds. She’ll be convinced that he needs help, but “Kevin” will shut her down. He’d much rather keep Laura busy with another undertaking, so he’ll suggest throwing her hat in the ring for mayor. Another election will be here before you know it, so Laura might as well try again and see it through this time.

General Hospital viewers will see plenty of excitement in Tuesday’s stunning episode. We’ll give you updates as other GH details emerge. Stick with the ABC soap and don’t forget to check CDL often for the latest General Hospital spoilers, updates and news.