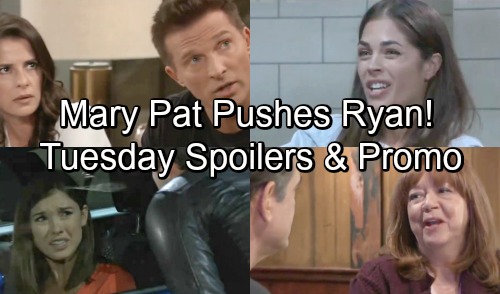 General Hospital (GH) spoilers for Tuesday, October 30, tease that Britt (Kelly Thiebaud) will play hardball. Anna (Finola Hughes) just showed up with an enticing offer, but it’s not quite enticing enough! She’s essentially suggesting Britt could trade places with her mom. If she helps Anna lock up Liesl Obrecht (Kathleen Gati), Britt will get an early release in return.

However, Britt won’t be willing to sell out Liesl for her freedom alone. She’ll insist that Anna will have to sweeten the pot. Britt knows Anna needs her, so she’ll milk this deal for all it’s worth. Elsewhere, Chase (Josh Swickard) will approach Willow Tait (Katelyn MacMullen) in her vehicle. GH fans will recall that she’s Aiden’s (Jason David) teacher, but she’ll cross paths with Chase as well.

Unfortunately, their initial meeting will come with some hiccups. When Chase appears, Willow will shout that he should get away from her car. She’ll call him a freak, but Chase will explain that she’s got it all wrong. He’ll probably flash his badge and assure Willow that he comes in peace.

While Chase explains the reason for this chat, Lulu (Emme Rylan) will go out for a drink with Peter (Wes Ramsey). They’ll continue to bond, but someone will derail their fun night. After Lulu spots someone surprising, she’ll fly into a rage. Lulu may gear up for a heated confrontation with the person who gets her riled.

Across town, the Margaux (Elizabeth Hendrickson) debate will continue. Thanks to Sam’s (Kelly Monaco) sneakiness and those old love letters, some shocking proof has come to light. As CDL exposed, Margaux’s mom, Jeanette (Ely Pouget), ordered the hit on Vincent, which is obviously a huge bombshell. Jason will contend that they should put this info in Margaux’s hands. If she covers it up, they’ve got the goods!

Other General Hospital spoilers say Carly (Laura Wright) will remain disheartened. She wants to see improvements for the patients at Ferncliff, but there’s plenty of red tape to cut through. Nevertheless, Laura (Genie Francis) will vow to make changes. She’ll promise they’re going to fix Ferncliff’s problems and Michael (Chad Duell) will back her up.

Speaking of Michael, he’ll go through another rough patch in Tuesday’s episode. Michael will deny his grief issues, but they’ll keep taking a toll. Over with Mary Pat (Patricia Bethune), she’ll be awfully smug with “Kevin” (Jon Lindstrom). It looks like Mary Pat will drop some blackmail hints. She still believes Kevin’s keeping his twin brother locked up, so she may wonder what that secret’s worth – GH spoilers hint that it could be worth her life!

Mary Pat realizes “Kevin” doesn’t want the Ryan (Jon Lindstrom) news to get out. What she doesn’t know is that Ryan and Kevin have swapped places. Being in the dark on that fact will likely prove fatal soon enough! We’ll give you updates as other General Hospital details emerge. Stay tuned to ABC’s GH and don’t forget to check CDL often for the latest General Hospital spoilers, updates and news.