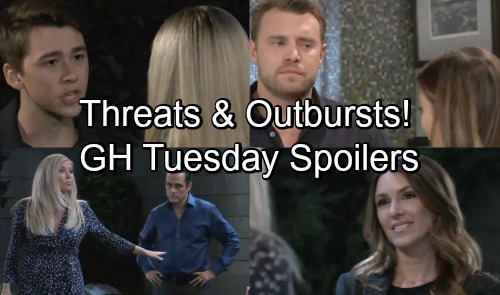 General Hospital (GH) spoilers for Tuesday, October 9, tease that Laura (Genie Francis) will reach out to Alexis (Nancy Lee Grahn) for help. She’ll explain what she needs and hope her latest plot pays off. Laura warned Valentin (James Patrick Stuart) that she’d be coming for him. Perhaps she’ll hope that Alexis can pitch in on her plan to bring Valentin down.

At GH, Liz (Rebecca Herbst) will open up to Terry (Cassandra James). She’ll grumble about the issues she’s facing with her boys, but she’ll eventually stop herself. Liz will guess she should just count her blessings. After all, her sons aren’t dying like Kim’s (Tamara Braun) pride and joy. Oscar (Garren Stitt) is headed down a deadly path, so Liz’s problems may seem minor in comparison.

Meanwhile, Kim and Drew (Billy Miller) will discuss their tricky situation. Oscar isn’t interested in the clinical trial, but Kim will feel like they have to intervene as parents. If there’s a chance to prolong Oscar’s life, he needs to take it. Drew will agree, but he may not be keen on forcing Oscar. They haven’t handled this whole ordeal correctly, so that’ll just be one more reason for Oscar to lash out.

Speaking of lashing out, that’s exactly what Oscar will do in Tuesday’s episode. General Hospital spoilers say Josslyn (Eden McCoy) will corner her ex and demand some answers. She’ll refuse to believe their relationship has to end like this. Oscar’s determined to make Joss hate his guts, so he’ll make it clear that it’s over. He’ll shut down Josslyn’s many attempts to get their romance back on track.

Other General Hospital spoilers say Jason (Steve Burton) will reassure Sam (Kelly Monaco). He’ll sense that she’s a bit uneasy, so he’ll gently encourage her to confide in him. Jason will insist that Sam can tell him anything. She might divulge her fears about reuniting as well as her desire to do just that.

Sam’s certainly battling some conflicted feelings right now, but she knows she wants to be closer to Jason. She just asked him to stay, so it won’t be long until things turn sexy once more. Unfortunately, Drew will interrupt this round of passion. If Jason and Sam ever hope to hit the sheets again, they’ll just have to be patient.

Finally, Margaux (Elizabeth Hendrickson) will make her stance known. The PCPD is backing off the Vincent Marino case, but Margaux has no intention of giving up. She’ll spell it out for Sonny (Maurice Benard) and Carly (Laura Wright) on Tuesday, but they won’t let her see them sweat. Carly will suggest that the DA has no proof. She’ll contend that Margaux will never be able to charge Sonny for this.

Margaux will disagree and promise that one way or another, Sonny will pay the price for his actions. It sounds like some hot drama’s ahead, so don’t miss these exciting scenes. We’ll give you updates as other GH news comes in. Stay tuned to the ABC soap and don’t forget to check CDL often for the latest General Hospital spoilers, updates and news.