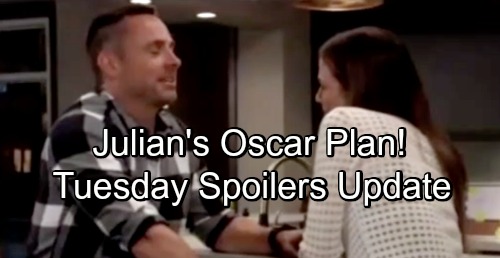 General Hospital (GH) spoilers update for Tuesday, September 18, tease that Cameron (William Lipton) will get fed up with the whole Oscar (Garren Stitt) situation. He’ll feel like Liz (Rebecca Herbst) thinks Oscar is some fragile flower. Cam will rant about his mom overreacting, but she’ll push him to stop provoking Oscar and try to keep the peace. Liz certainly won’t want to rush Oscar toward an early burial!

Over with Julian (William deVry), he’ll visit Kim’s (Tamara Braun) place and note that he’s looking for Oscar. Julian’s been seeking a way to connect with Kim’s son, so perhaps he’s got some new suggestions. Of course, they may not have time to bond if Oscar’s near death.

As Kim chats with Julian, she’ll undoubtedly have Oscar’s looming demise on her mind. She’ll just try to put on a brave face and keep the big secret. The last thing Kim needs is another person finding out. Meanwhile, Drew (Billy Miller) will bring Sam (Kelly Monaco) up to speed on the decision he made with Kim. He doesn’t agree, but he’s going along with Kim’s plan to delay their tumor confession.

Drew and Kim intend to wait until after Oscar’s next birthday. Then, they’ll drop the deadly bomb on him. Sam will want to support Drew through this crisis, but he’ll end up rejecting her pretty soon. Drew won’t like the idea of growing closer to Sam and creating the potential for more heartache. He wants to be friends, but they have to maintain some boundaries to avoid painful desires.

Other General Hospital spoilers say Ryan (Jon Lindstrom) will put on quite a show. He’ll carry out his Kevin (Jon Lindstrom) charade in front of Lucy (Lynn Herring), who just might develop some suspicions. However, Ryan will do his best to shut them down. He’ll eventually stop Lucy from reminiscing and turn her attention to something that won’t trip him up.

Nearby, Lulu (Emme Rylan) will deliver a shocker to Maxie (Kirsten Storms). She’ll admit she took the Ryan Chamberlain assignment, but she’ll promise to tackle it correctly. Lulu has no intention of exploiting the sorrow of the victims or making Ryan look like anything other than a monster.

Over with Nina (Michelle Stafford), she’ll seek more info on all the Cassandra (Jessica Tuck) drama. GH spoilers say Nina will ask Anna (Finola Hughes) about the possible danger. Anna may not see an imminent threat, but you can never be too careful in Port Charles!

Curtis (Donnell Turner) will also have an important meeting on Tuesday. He’ll sit across from someone he calls his friend’s daughter, but it probably won’t be Nina’s long-lost child. Instead, Curtis may help out another buddy’s kid. There’ll be time to resume the search Valentin (James Patrick Stuart) ordered later.

General Hospital has another exciting episode in store, so don’t miss the twists and turns ahead. We’ll give you updates as other GH news comes in. Stay tuned to the ABC soap and don’t forget to check CDL often for the latest General Hospital spoilers, updates and news.