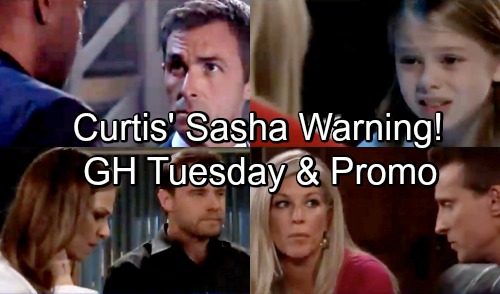 General Hospital (GH) spoilers for Tuesday, September 25, tease that Brad (Parry Shen) will struggle to get a grip. He’ll track down Julian (William deVry) and insist that Lucas (Ryan Carnes) is going to find out the truth about “Wiley.” Julian will see that Brad’s starting to panic, so he’ll urge him to calm down and explain.

After Brad reveals “Wiley’s” heart condition, he’ll add that there are questions about the birth mom’s medical records. Brad will worry that Lucas is going to dig too deep and learn everything. General Hospital spoilers say he’ll push Julian to fix this, presumably by altering the birth mother’s info and making it all match up.

However, Brad will be out of luck for now. Julian will contend that a move like that’s too risky, so he’ll want to sit tight and just let this play out. Meanwhile, Jordan (Briana Nicole Henry) will try to achieve some form of peace. She’ll approach Stella (Vernee Watson) for a chat and hope she can make a little progress in their relationship.

Other General Hospital spoilers say Curtis (Donnell Turner) will meet up with Valentin (James Patrick Stuart). He’ll insist that if Sasha Gilmore (Sofia Mattsson) isn’t a match, he’s out of the search for Nina’s (Michelle Stafford) daughter. Curtis cares about Nina, so he’ll feel like he’s too close to this situation. He won’t like the idea of keeping such a huge secret from his friend.

Elsewhere, Nina will enjoy hanging out with Charlotte (Scarlett Fernandez). They’ll have a great time, but Charlotte will eventually express her concerns. She’ll wonder if this is their last outing together. Charlotte will fear that Nina’s divorce from Valentin will mean the end of their relationship, too.

Nina knows Valentin will let her see Charlotte whenever she wants, so she may offer reassurance. They naturally won’t be in each other’s orbit as much, but Nina’s bond with Charlotte will remain. Still, Nina will hope to find her own long-lost daughter. She’ll long to get to know this mystery woman and form a special connection with her.

Across town, Carly (Laura Wright) will grill Jason (Steve Burton) about the corpse case. The cops are closing in, so Carly will want updates on any new info. She’ll ask if there’s anything to worry about besides the gun. Jason may confess that Vincent Marino is Margaux’s (Elizabeth Hendrickson) father. It’s clear that Margaux has a deeply personal reason to take down Sonny, so Carly should be terrified.

At GH, Oscar’s (Garren Stitt) emotional outburst will continue. He’ll demand to know how long Kim (Tamara Braun) and Drew (Billy Miller) have been hiding his diagnosis. Oscar’s still reeling over his tumor and the deadly outcome he’s facing. He’ll be appalled when he discovers by his parents’ lies, but Kim should take most of the blame. She’s known far longer and fought Drew’s attempts to confess.