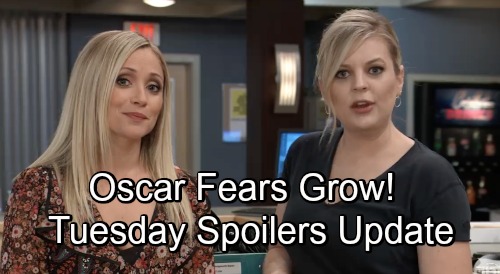 General Hospital (GH) spoilers for Tuesday, September 4, tease that Diane (Carolyn Hennesy) will deliver some stunning news. She’ll reveal that her client won’t be appearing in court today, so Alexis (Nancy Lee Grahn) will be caught off guard. Of course, this will be a pleasant surprise for Brad (Parry Shen) and Lucas (Ryan Carnes). It turns out the birth mother doesn’t want her baby back after all.

The judge will dismiss the rest of the waiting period and declare “Brucas” the legal parents. They can take “Wiley” home without this threat hanging over them. Alexis will assure Brad and Lucas that everything’s been taken care of. She’ll put their minds at ease – at least about this particular problem.

Brad will still battle concerns about the switch being uncovered. It seems Alexis may hear about Julian’s (William deVry) latest stunt as well. General Hospital spoilers say Alexis will face serious rage on Tuesday. She may lash out at Julian for interfering, but at least things worked out for Lucas and Brad.

Julian will also summon Drew (Billy Miller) for a discussion. They’ll talk about Oscar (Garren Stitt), who obviously wants to see his parents reunited. Julian will question Drew about his own desires, so Drew will set him straight. He’ll make it clear that he has no interest in getting back together with Kim (Tamara Braun). Drew can’t even remember their romance, so he won’t stand in Julian’s way.

With that in mind, Julian will seek some assistance. He might ask Drew to help Oscar get with the program. Oscar cares what his dad thinks, so it wouldn’t hurt for Drew to nudge him in the right direction. However, Oscar’s in the midst of a major medical scare. He just collapsed in front of Jason (Steve Burton), so getting him to GH is the priority.

After Oscar’s with doctors and nurses, Jason will track Kim down and explain everything. She’ll be filled with fear and dread, so Liz (Rebecca Herbst) will want to be there for her. Over with Cameron (William Lipton) and Josslyn (Eden McCoy), they’ll do some decorating in the park. As they prepare for a party, Cam will wonder what’s delaying Oscar. He’ll think Joss should be miffed that he kept her waiting.

Josslyn will likely defend Oscar, but Cameron will point out that this is a special day for them. They’re supposed to be getting ready for their anniversary, so Cam will feel like Joss is being neglected. General Hospital spoilers say Cameron and Josslyn will be brought in the loop soon. They’ll definitely be worried when they hear about Oscar’s collapse.

At Ferncliff, Ryan (Jon Lindstrom) will grip Kevin’s (Jon Lindstrom) throat and force him to lose consciousness. After dragging Kevin over to the wall, Ryan will pat himself on the back for pulling this off. Next, he’ll snatch up Kevin’s clothes and leave his twin to struggle in a straitjacket.