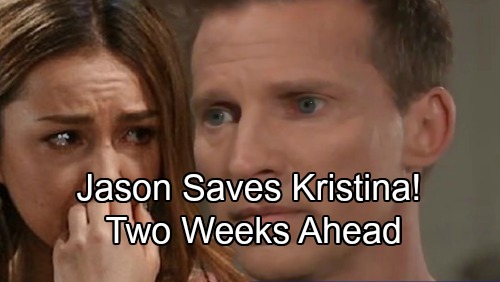 General Hospital (GH) spoilers tease that Kristina (Lexi Ainsworth) has a crisis headed her way. She was a big part of the explosion drama at Charlie’s Pub, but she’s faded to the background since then. Many GH fans have been wondering when Kristina would get a real story of her own.

Fortunately, it looks like that’s coming up soon. General Hospital spoilers say Kristina will face some trouble on October 22. She’ll get some assistance from Alexis (Nancy Lee Grahn), but it won’t be enough to get her through this. Whatever nightmare Kristina tackles will leave her devastated. She’ll have to rely on her family as well as another surprising source of comfort.

What will leave Kristina feeling so broken and vulnerable? It’s possible we’ll see some lingering Parker (Ashley Jones) issues. Kristina broke things off and moved back to Port Charles, but she still cares about her. If Parker ended up in an accident or something, it would certainly affect Kristina on a deep level.

However, GH may want to leave all that behind. Kristina’s moved on, so the show might want to keep that momentum going. In that case, we’d need another reason for Kristina to be freaked up and distraught. Could this involve Mike (Max Gail)? His condition’s declining, so he might forget who Kristina is and lash out.

If Mike’s meltdown caused him to injure himself, that’d be a reason for Kristina to get upset. Then again, General Hospital could take the Sonny (Maurice Benard) angle. If Margaux (Elizabeth Hendrickson) somehow gets Kristina to spill something she shouldn’t, it could lead to some incriminating evidence and guilt.

Regardless, Alexis will want to be there for her daughter. She’ll do her best to help, but another character could prove more beneficial. Two weeks ahead, on October 23, General Hospital spoilers say Jason (Steve Burton) will come to Kristina’s rescue again. He swooped in and saved Kristina after she lost consciousness in the pub, but this time his actions may be slightly less heroic.

Jason may just give Kristina a pep talk and help her move forward. That could earn Sam’s (Kelly Monaco) gratitude and keep the “JaSam” reunion right on track. Are you excited to see what’s in store for Kristina and the characters who’ll step up for her?

It sounds like some fantastic scenes are in the works, so don’t miss them. We’ll give you updates as other GH news comes in. Stay tuned to the ABC soap and don’t forget to check CDL often for the latest General Hospital spoilers, updates and news.