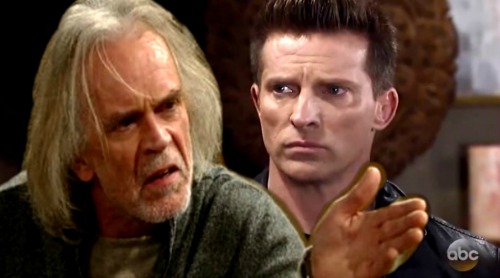 General Hospital (GH) spoilers tease that Jason (Steve Burton) and Sonny (Maurice Benard) will close in on the truth. Anna (Finola Hughes) will advise against pursuing their current angle. Thanks to the secrets she’s apparently keeping, Anna won’t want them to find out anything more about Faison’s (Anders Hove) other son.

Whether Anna is Peter’s (Wes Ramsey) mother or not, he’s involved in this storyline. It looks like Sonny will develop some suspicions about Peter soon. Meanwhile, Anna will make a decision. She’ll contend if you can’t beat ‘em, you might as well join ‘em.

General Hospital spoilers say Anna will team up with Sonny and Jason on next week’s new GH episodes, January 22-26. Her confrontation with Dr. Obrecht (Kathleen Gati) will undoubtedly push her to act. Jason and Sonny should be grateful for Anna’s assistance. They need all the help they can get right now.

The gang will discover Peter’s connection to Faison eventually. They may not have proof, but Sonny will think he knows what’s up. However, Peter will play it cool. On January 31, Peter won’t have any info to offer. He’ll attempt to keep his Faison ties on the down low for as long as possible.

On February 1, Anna will hit another dead end. It sounds like this mission won’t be an easy one. Sonny, Jason and Anna will struggle to make progress, but they’ll keep at it. They can’t leave Faison out there to run amok. It’s time to bring this GH villain down once and for all.

General Hospital spoilers state that Jason will finally have a breakthrough, but his plans will go awry. Jason will land in a tight spot while Sonny receives a mysterious message. Uh-oh. This can’t be good. Will Jason become Faison’s prisoner? Faison wanted Jason dead before the traitor messed everything up. He’ll undoubtedly hope he can finish what he started.

As for Sonny’s message, it should be a cryptic hint. Maybe Peter will secretly point Sonny in Faison’s direction so he can help Jason. If not, perhaps Faison will simply get in touch to gloat! Regardless, Sonny won’t want to let Jason down. He may recruit more help as he tries to keep his buddy safe.

Some hot drama’s coming up on the ABC soap. We’ll give you updates as other news emerges. Stay tuned to GH and don’t forget to check CDL often for the latest General Hospital spoilers, updates and news.