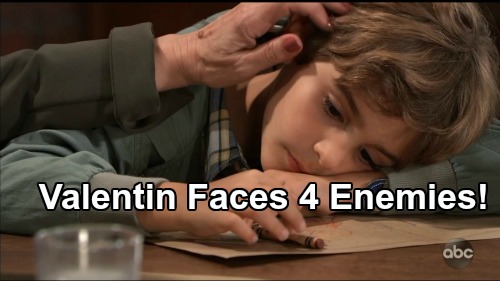 Lulu (Emme Rylan) tried her best, but it was tough with coddling Papa and Nina there. At least Valentin admitted this may be his fault. His behavior obviously isn’t a shining example of how an elementary schooler should behave. Now that Laura (Genie Francis) is connecting the dots, there’s going to be trouble. It won’t be long until all parties involved know who’s to blame.

Charlotte’s just a kid, even if she’s a mean one. She hasn’t had the proper discipline and that’s not her fault. Valentin will likely be the one Liz (Rebecca Herbst) and Laura (Genie Francis) come for. Laura is always looking for extra reasons to hate Valentin anyway. As for Liz, she’ll fight anyone who enables another child to hurt her own. Liz may be small, but she’s mighty when it comes to her boys!

Franco sees a lot himself in Aiden and has grown quite protective of him. He’ll probably join the “let’s gang up on Valentin” party. That could be interesting since Franco and Nina have a nice friendship. Things could quickly turn tense once Valentin is targeted as a negative influence.

Nina may think Franco has no room to talk, but Aiden isn’t the one who’s turned into a little monster. Franco has turned his life around, so it’s not the same thing. This is about Aiden and the pain Charlotte’s forcing him to endure. Liz, Laura and Franco may all take their turns with Valentin. Lulu will undoubtedly take a few more jabs, too. She isn’t pleased with how Valentin’s been handling all this.

Nina lets Charlotte get away with everything, so she’ll be part of the drama. However, her role will mostly be to defend Valentin from his four latest GH enemies. Nina may fire back at Laura, Liz, Franco and Lulu in some fierce confrontations.

Naturally, Valentin and Nina will grow closer throughout this nightmare. General Hospital spoilers say Valentin will be on the verge of reuniting with Nina, but his secret will hang like a dark cloud. The exploding Sasha (Sofia Mattsson) scheme should bring Valentin’s next crisis down the road.

General Hospital fans won’t want to miss all Valentin’s turmoil in the coming weeks. We’ll give you updates as other GH news emerges. Stay tuned to the ABC soap and don’t forget to check CDL often for the latest General Hospital spoilers, updates and news.