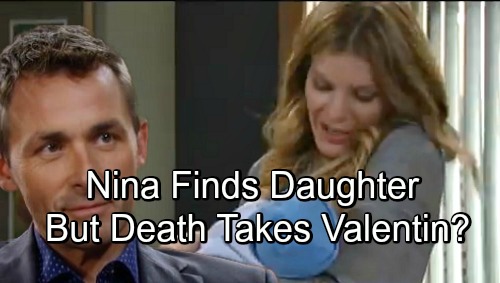 General Hospital (GH) spoilers tease that Curtis (Donnell Turner) will keep up his efforts to find Nina’s (Michelle Stafford) daughter. He didn’t get very far with Carter Buckley, but Spinelli’s (Bradford Anderson) new lead should take him further. Curtis intends to follow the trail and hopefully track Nina’s kid down.

Valentin (James Patrick Stuart) will stay on top of the situation and push Curtis to work fast. He knows how much this would mean to Nina, so he’ll do whatever it takes to get answers. Of course, Nina’s on the right track now as well. Thanks to that half a locket Madeline (Donna Mills) left her, Nina believes her child’s alive and just waiting to be found.

Nina even made a phone call to get the ball rolling on this search. However, that call could also stir up GH trouble. Nina contacted someone she viewed as an excellent jewelry appraiser. She suggested that she’s hoping to learn more about a new piece she acquired. This appraiser could offer some helpful clues, but you have to be careful what you wish for on a soap.

Nina could easily gain a daughter, but will she lose her true love in the process? Valentin and Nina on the verge of finalizing their divorce, but an even worse blow could be looming. Several General Hospital hints are pointing in a deadly direction.

Word has it a character could be killed off in the coming weeks. There’s also been persistent GH buzz about James Patrick Stuart possibly exiting the show. More GH hints surfaced in Monday’s episode, September 10. Nina tried to return Valentin’s rings and noted that she couldn’t live up to her vows. She couldn’t promise she’d stay with him until death do them part.

Valentin insisted that Nina could get rid of the rings if she wanted, but he couldn’t take them back. He assured Nina that he’d love her until the day he dies, so that sounds awfully ominous. General Hospital may be laying the groundwork for Valentin’s shocking demise.

Will the daughter search somehow bring lethal consequences? If this kid ended up as part of some dangerous family, that could lead to problems. Ryan (Jon Lindstrom) is also on the loose, so there’s serial killer peril in town. There’s even a chance a Nikolas Cassadine recast could show up and take his revenge!

Regardless, Valentin is clearly going to land in harm’s way. Will he bite the dust and leave Nina devastated? We’ll give you updates as other GH news comes in. Stay tuned to the ABC soap and don’t forget to check CDL often for the latest General Hospital spoilers, updates and news.