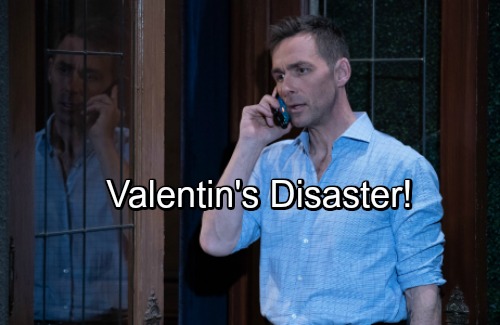 General Hospital (GH) spoilers tease that Valentin (James Patrick Stuart) will work on his latest plan. He’ll feel confident that he can get Nina (Michelle Stafford) back and fix their family. Valentin recently put a deal in writing. He’s just asking for 30 days to make this happen. If Nina still wants a divorce after Valentin’s month is up, he’ll grant her request and sign the papers.

However, Valentin will soon run into trouble. Repairing the damage won’t be as easy as he thought. Valentin’s charm can only take him so far, so expect major drama after his next move. General Hospital spoilers say Valentin will have a romantic surprise for Nina. He’ll hope it’ll help her remember the love they share.

Unfortunately, it’ll do quite the opposite. Valentin’s sweet shocker won’t please Nina at all. It’s possible Valentin will catch Nina at a bad time. She’s been on edge thanks to her secret with Liesl (Kathleen Gati), so it’s not hard to set her off.

When you combine that with the betrayal Nina’s feeling, it’ll be a recipe for disaster. General Hospital spoilers say Nina will rip into her current husband. She’ll think it’s ridiculous for Valentin to believe he can snap his fingers and win her over. Nina will make it clear that she can’t be bought or persuaded by Valentin’s charisma. She’s truly fed up, so it’s going to take a lot more than that.

GH fans can expect Valentin to be a bit disheartened. He’d love for the conflict to be over, but he’ll need to keep at it. If Valentin wants to undo the damage, he’ll have to put in some real effort. Despite this horrible setback, Valentin will refuse to go down without a fight!

General Hospital buzz hints that Nina may try her luck with someone new eventually. Could it be Peter (Wes Ramsey) in a surprising twist? Will Nina fall for another soap hunk instead? Regardless, Valentin might hold out hope and reunite with Nina at some point. It all depends on the stories GH has in mind.

Are you rooting for Nina and Valentin to make it work or do you think she should stand her ground? We’ll give you updates as other GH news comes in. Stay tuned to the ABC soap and don’t forget to check CDL often for the latest General Hospital spoilers, updates and news.