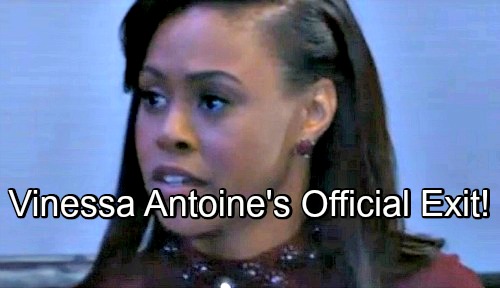 Antoine has joined the cast of Diggstown, an exciting legal drama that’ll air on Canada’s national broadcaster (CBC). In fact, Antoine will be playing the lead role! She’ll portray Marcie Diggs, a hotshot lawyer who suffers a terrible tragedy and reevaluates her priorities. Marcie will trade the world of corporate law for a legal aid office, which means there’ll be plenty of material to explore.

Of course, General Hospital watchers will be sad to see Antoine go. On Twitter, Antoine confirmed her exit and offered viewers an explanation for her decision. “My job is to create and inspire,” Antoine said. “I hope that I did that a little in playing #JordanAshford. I believe that I have taken her as far as I can.”

Antoine also wanted to clarify that she tried to work something out with the show. It appears she wanted to shoot Diggstown for a while and return later, but that wasn’t feasible for GH. Unfortunately, General Hospital felt Jordan would be off canvas too long, so they opted to just part ways with Antoine.

The departing GH star is anxious to see what the future holds. Antoine offered her gratitude and a request in the conclusion of her statement. “It’s time to make room for more women of color in prominent roles on television,” Antoine said. “I’m grateful to assist in that by starting this new chapter in my journey. I hope you’ll all come along.”

Will you miss Vinessa Antoine as Jordan Ashford? Are you glad to see her moving on to bigger and better things? Will you check Antoine out as Marcie on Diggstown? We’ll give you updates as other GH news comes in. Stay tuned to the ABC soap and don’t forget to check CDL often for the latest General Hospital spoilers, updates and news.

(1) There are so many people that God put into place who are directly and indirectly responsible for my time at @GeneralHospital You know who you are. I thank you. I came into this world as an artist. My job is to create and inspire. I hope that I did that a little in pic.twitter.com/8rDDUAc4t5