General Hospital (GH) spoilers for Wednesday, April 11, tease that Kevin (Jon Lindstrom) will offer a bit more guidance. It looks like Franco (Roger Howarth) may need another session to help him process the latest revelations. Kevin will insist that this Jim’s (Greg Evigan) fault, not Franco’s. He’ll do his best to help Franco find closure in his painful past and move on with his life.

Liz (Rebecca Herbst) will hope she can help Franco as well. In Wednesday’s episode, Liz will have some great news to pass along. What does Liz want to share? Jake (Hudson West) might pop in for a visit at some point. If not, Liz could at least pass along a homemade “get well soon” card or something along those lines.

Of course, we can’t rule out something jaw-dropping like a pregnancy! Many “Friz” fans would love to see Franco and Liz have a baby together. However, it’s too early to say anything for sure. Regardless, Franco will have a lot to deal with in the coming episodes. He’ll suggest he still needs time to get his act together, so Liz will try to support Franco without smothering him. 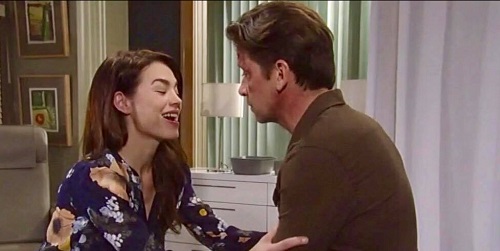 Other General Hospital spoilers say Maxie (Kirsten Storms) will try to get through to Nina (Michelle Stafford). She won’t think Peter (Wes Ramsey) is as bad as Nina makes him out to be. In fact, Maxie will believe Peter has a good heart. She’ll mention how much comfort he brings her and encourage Nina to back off.

However, Nina just won’t be willing to do that. GH fans can expect her to get in touch with Curtis (Donnell Turner) again. She’ll hope to hear about some progress in this case. Meanwhile, Valentin (James Patrick Stuart) will give Peter an earful. He’ll argue that his partner in crime has been avoiding him.

Naturally, Valentin will assume that Peter’s been hanging out with Maxie. He’ll reiterate that it’s a terrible idea and point out that Nina’s highly suspicious. Valentin will deliver some stern threats and hope that Peter will finally cool it. You can bet that Peter will ignore Valentin’s warnings, but he may regret that decision down the road.

Over with Jason (Steve Burton), he’ll speak with Anna (Finola Hughes) about the Heinrik hunt. They’ll exchange thoughts on the new developments, but they’ll disagree about what comes next. General Hospital spoilers say Anna will soon pose a surprising suggestion. She’ll think she has a way to track Heinrik down, but it appears Jason won’t have much faith in this strange strategy.

GH viewers won’t want to miss all the hot drama. We’ll give you updates as other details emerge. Stay tuned to the ABC soap and don’t forget to check CDL often for the latest General Hospital spoilers, updates and news.

“You think I imagined all of this?!?” #GH55 pic.twitter.com/zxRlI8jxSQ