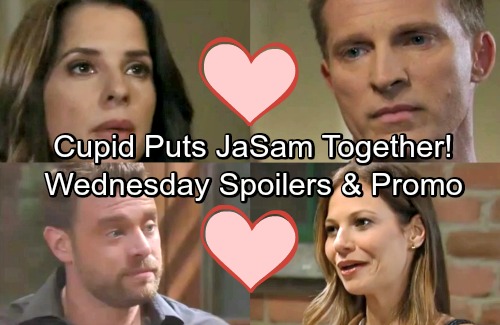 General Hospital (GH) spoilers for Wednesday, April 25, tease that Curtis (Donnell Turner) will await an answer to his surprising question. After hearing about the spot on Jordan’s (Vinessa Antoine) lung, Curtis blurted out a proposal. He wants Jordan to know he’s got her back and will be with her every step of the way.

Since her cancer scare prompted this move, Jordan won’t be sure she should say yes. She won’t want Curtis to marry her out of obligation or fear. However, Curtis will assure Jordan that he loves her with all his heart. He’ll beg Jordan to get on board with the idea, so she’ll probably cave in.

Elsewhere, Alexis (Nancy Lee Grahn) and Finn (Michael Easton) will try to get on the same page. They’ve been trying to take things into romantic territory, but it’s been pretty awkward. Alexis will suggest that maybe it’s not a good idea to be each other’s rebound. However, that won’t stop these two from making another trip to the bedroom soon!

Other General Hospital spoilers say Josslyn (Eden McCoy) will have some advice for Oscar (Garren Stitt). This could tie in with his goal of reuniting his parents and becoming a united family. Josslyn will hint that Oscar needs to make the first move, so he’ll indeed set a plan in motion later.

Of course, Kim (Tamara Braun) and Drew (Billy Miller) may not need much help. When Kim bumps into her former flame, she’ll offer to buy him lunch. Kim only knows the Drew she used to love. She doesn’t know this new memory-less version. Sitting down for a meal together could certainly help with their reconnection.

Across town, Lucas (Ryan Carnes) and Julian (William deVry) will have an awkward encounter. There’ll be some tension as usual, but it looks like Lucas will actually have something nice to say. He’ll tell Julian about something that couldn’t have happened without him, so it’ll be great to see them being civil for once.

Over with Jason (Steve Burton) and Sam (Kelly Monaco), they’ll find themselves in a bit of a predicament. Once they end up stranded, it won’t take Sam long to figure out who’s responsible. Spinelli (Bradford Anderson) will be the one who plays GH’s Cupid and tries to bring “JaSam” together.