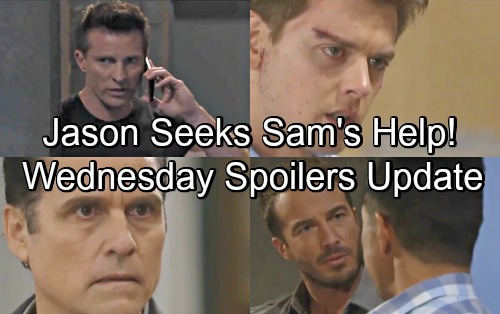 General Hospital (GH) spoilers update for Wednesday, August 1, tease that Chase (Josh Swickard) will blame himself for the baby tragedy. He’ll hate that Michael (Chad Duell) suffered such a great loss, but he’ll be pleased about Nelle’s (Chloe Lanier) takedown. Chase will hope that can give Michael some comfort in these dark times. He’ll hope Michael and his family can live in peace soon.

During a chat with Lulu (Emme Rylan), Chase will bring up Nelle and her plot to murder Michael. Of course, Lulu will be stunned by the sinister strategy. She knew Nelle was conniving, but this schemer’s obviously a full-blown psycho.

Chase will note that the cops were monitoring everything, but the plan still got away from them. The crash was a real curveball, but at least they got the evidence they needed. Ava (Maura West) will listen in on their conversation nearby. She’ll realize Nelle got duped, but she’ll hope she can keep all the incriminating blanket drama under wraps. Ava has to protect herself here!

General Hospital spoilers say Ava will support fearful Kiki as well. She’ll promise that Dr. Bensch (James DePaiva) is going to face consequences. Ava won’t want Kiki to lose her fighting spirit, so she’ll give her daughter a pep talk and hope everything goes as planned.

Nevertheless, you can bet that some surprises are coming up at the trial. Kiki will deal with some consequences of her own, but she’ll try to stay positive until then. In the meantime, Sonny (Maurice Benard) will be devastated for Michael. It appears Liz (Rebecca Herbst) will fill Grandpa Corinthos in on the baby’s death.

Sonny will know this is going to be a difficult loss for their family. He’ll brace for the crushing grief his son will battle. Michael will indeed be reeling in the waiting area. As Nelle cries through a cold stare, she’ll rip into Michael with everything she’s got. Nelle will scream that this is all Michael’s fault, but he won’t need her to tell him. Michael will feel bad enough as it is.

However, GH fans know the real story. Nelle swapped her baby with dead Wiley, so this isn’t even Michael’s child. That bomb will drop at some point, but Brad (Parry Shen) will try to conceal it for now. When Lucas (Ryan Carnes) asks where he drove off to, Brad will fib a little and change the subject. He won’t want Lucas to know that he was off trading kids.

Other General Hospital spoilers state that Carly (Laura Wright) and Josslyn (Eden McCoy) will reunite. After a warm embrace, Carly will explain the complicated situation with Nelle. She’ll reveal all Nelle’s dirty tricks, including the fact that she tried to kill Michael. Joss may not want to believe it at first, but everything should make sense eventually. She’ll inevitably open her eyes and unleash her fury!

Finally, Jason (Steve Burton) will need some assistance. He’ll turn to Sam (Kelly Monaco) for help with something important. Sam will visit Ferncliff with Curtis (Donnell Turner) on Thursday, so perhaps they can score proof of Carly’s unfair treatment. Keeping Carly out of there is Jason’s only goal at the moment. He’ll count on Curtis and Sam to tackle this tough task.

It sounds like another hot episode’s on the way. We’ll give you updates as other GH news comes in. Stick with the ABC soap and don’t forget to check CDL often for the latest General Hospital spoilers, updates and news.