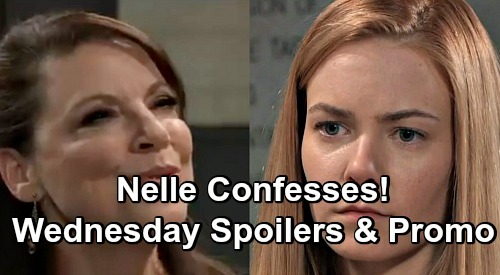 General Hospital (GH) spoilers for Wednesday, December 26, (Monday, December 24 is a repeat episode and Tuesday, December 25 is sports) tease that Josslyn (Eden McCoy) will share a sweet moment with Oscar (Garren Stitt). He may be worry about possibly celebrating his last Christmas, but Josslyn will push for positivity.

She’ll point out that a lot can change in a year. Josslyn will hope that Oscar recovers and gets to spend many more holidays with his loved ones.

Liesl will mention how she delivered Nelle’s son, so she’ll wonder what this mom did with her beautiful baby boy. Nelle will glare at her new threat and try to figure out how to handle this. She can’t lie her way out of trouble like she usually does.

The jig is up, so Nelle will come clean and hope that a fellow schemer like Liesl can understand. Part of Dr. O may be impressed, but she’ll definitely file this secret away for future use. You never know when some good leverage will come in handy!

Over with Willow (Katelyn MacMullen), GH spoilers say she’ll finally open up to Michael. Willow will admit that her pregnancy came as a surprise. She’ll talk about all the issues in her life and how hard it was to give the baby up. At some point, Willow will discover that Michael is “Wiley’s” godfather, so that’ll inevitably make all this more complicated.

Other General Hospital spoilers say Laura (Genie Francis) will lean on Carly (Laura Wright) for support. She’ll still be struggling over the personality changes in “Kevin” aka Ryan (Jon Lindstrom).

Laura will worry about “Kevin’s” mental health and Carly will back her up. She’ll contend that “Kevin” can’t be in his right mind if he would pick Ava (Maura West) over Laura.

Elsewhere, Ryan will pat himself on the back for pulling this off. He’ll feel like he’s doing an excellent job of fooling Port Charles and wreaking havoc right under everyone’s nose. General Hospital spoilers say Ryan will torment Kevin a bit more and enjoy every minute of it.

GH fans can also expect a fierce outburst from Ava. She’ll lash out at Anna (Finola Hughes) and snarl that she should “let him stay.” Maybe Ava will be talking about Griffin (Matt Cohen) since it makes sense for Anna to be protective here.

She’s always trying to watch out for Griffin, but part of Ava still blames him for Kiki’s (Hayley Erin) death. Anna could get caught in the middle of some conflict.

Whatever the case, Ava will still be in mourning and that’ll bring some explosive anger. We’ll give you updates as other GH news comes in. Stay tuned the ABC soap and don’t forget to check CDL often for the latest General Hospital spoilers, updates and news.