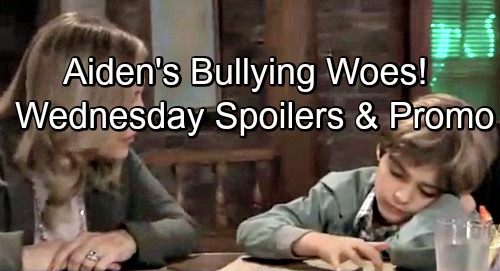 General Hospital (GH) spoilers for Wednesday, December 5, tease that Julian (William deVry) will have a major meltdown. He’ll be having a hard time over Kiki’s (Hayley Erin) death and the pain Ava’s (Maura West) dealing with. Julian will fling a liquor bottle off the bar as Alexis (Nancy Lee Grahn) walks in. She’ll remain calm and try to provide some support to her ex, who’s clearly in desperate need of it.

While Alexis comforts Julian, Valentin (James Patrick Stuart) will reassure Nina (Michelle Stafford). She asked if she could stay the night at Wyndemere to make Sasha (Sofia Mattsson) more comfortable, which Valentin was fine with. On Wednesday’s new GH episode, Valentin will make it clear that Nina’s free to stay there anytime. He’ll promise that he’ll always be there to welcome her home.

Of course, Nina will feel her heartstrings tugged all over again. She’s still in love with Valentin, so fighting her feelings will become increasingly difficult. Over with Laura (Genie Francis), she’ll gently push Aiden (Jason David) to open up about his problems. Laura will insist that if somebody is bothering Aiden, he can tell her. She won’t want the kid to feel nervous about tattling or expressing himself.

It looks like Aiden may offer a hint, so Laura could figure out the truth about Charlotte (Scarlett Fernandez) soon. That’s sure to bring some drama between Aiden and Charlotte’s families! In the meantime, Franco (Roger Howarth) will have a discussion with Cameron (William Lipton). It seems Cam will still be skeptical about becoming this perfect family, but Franco will do his best to win him over.

Other General Hospital spoilers say Michael (Chad Duell) will be on a fierce mission. He’ll storm in the police station to confront Chase (Josh Swickard) about Kiki’s murder case. Michael will snap at Chase to tell him exactly where he is on finding Kiki’s killer. He cared for Kiki a great deal, so he’ll be determined to get some justice.

Elsewhere, Lulu (Emme Rylan) will encounter Willow (Katelyn MacMullen) and strike up a conversation. She may bring up Charlotte’s issues as well as Chase’s interest in Ms. Tait. Lulu’s doing whatever she can to play matchmaker for those two.

At GH, Josslyn (Eden McCoy) will support Oscar (Garren Stitt) in his hospital bed. He’ll think she’s jumping the gun on something, so Joss may have big plans for their future. Oscar may shut those down since there’s no guarantee the clinical trial will work.

Nearby, Kim (Tamara Braun) will sense that something’s bothering Drew. He may admit that he has concerns about this experimental treatment. Everything feels awfully uncertain right now, so Drew and Kim will need each other to get through this.