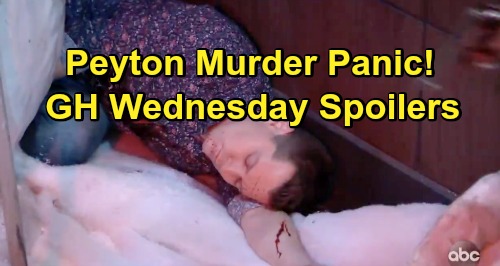 General Hospital (GH) spoilers for Wednesday, January 2, tease that Drew Cain (Billy Miller) and Kim Nero (Tamara Braun) will remain in denial. They just shared a steamy New Year’s Eve kiss, but they’re choosing to blame the nostalgia of the night. Kim admitted that they conceived Oscar Nero (Garren Stitt) on this holiday all those years ago. She added that she thought about telling Drew she loved him.

There’s still some lingering love on Kim’s end and now Julian Jerome (William deVry) is even more convinced of that. He’ll be busy mulling over the lip lock he witnessed. It turns out Drew will send Kim in Julian’s direction. General Hospital spoilers say he’ll push her to focus on her boyfriend, which would be a good idea if Julian hadn’t been around to see the smooch.

When Kim meets up with Julian, she’ll pretend everything’s fine. Kim will assume that what Julian doesn’t know won’t hurt him. Unfortunately, the damage is done. GH spoilers say Kim will get hurt as well when Julian breaks up with her. He’ll give an excuse that doesn’t make sense to Kim, but that’s only because he won’t want to bring up the “Krew” kiss.

Kim will be caught off guard by the split, but Julian will think it’s for the best. He won’t be doing this out of vengeance. Julian will genuinely view this as a sacrifice he’s making for Kim and Oscar. He’ll believe this is their shot at being a family with Drew, so he’ll step aside to let them take it.

Other General Hospital spoilers say Kristina Corinthos-Davis (Lexi Ainsworth) will go through some big changes. Things are awkward with Valerie Spencer (Brytni Sarpy) now, so Kristina’s feeling pretty low. Since she believes she screwed up that friendship, she’ll embrace the new pals she’s found at DOD.

Daisy (Kelsey Wang) has certainly been welcoming, so Kristina will be drawn further and further into her web. This is obviously a cult and the shifts Kristina’s headed toward won’t be good ones. Sam McCall (Kelly Monaco) will grow quite concerned about her sister’s bizarre attitude adjustment later on next week’s new GH episodes, January 2-4.

In the meantime, the murder investigations will heat up. Curtis Ashford (Donnell Turner) found blood splattered all over Peyton Mills’ (John Patrick Jordan) screening area. Now that Peyton’s body has surfaced on the Metro Court terrace, panic will erupt. Jordan Ashford (Briana Nicole Henry) will head back over to examine the crime scene and see if she can put this puzzle together.

General Hospital spoilers say Lulu Falconeri (Emme Rylan) will follow her nose for news. She’ll end up chatting with Ava Jerome (Maura West) and possibly getting her thoughts on this string of killings. Lulu’s visit will stir Ava to action, so it looks like Ava’s pursuit of justice will be a priority in the new year.

GH fans won’t want to miss the twists and turns ahead in this storyline. We’ll give you updates as other details emerge. Stay tuned to the ABC soap and don’t forget to check CDL often for the latest General Hospital spoilers, updates and news.