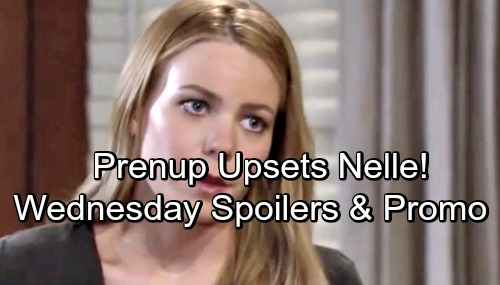 General Hospital (GH) spoilers for Wednesday, July 11, tease that Nelle (Chloe Lanier) will seem glum during a chat with Michael (Chad Duell). He dropped a prenup on her, so that was quite a blow. Nelle assumed she had Michael wrapped around her little finger, but he’s not wrapped as tightly as she thought.

When they meet back up, Nelle will suggest that she talked to her lawyer. She’ll mention the prenup Michael wants her to sign and they’ll discuss it once more. This is definitely feeding the doubts Chase (Josh Swickard) created, but Nelle may propose a compromise. She might remind Michael of how much his family hates her and insist that she should be taken care of if this doesn’t work out.

Whatever the case, Michael will hope that everything goes according to plan. He’s certainly got a lot riding on this scheme. At GH, Chase will corner Finn (Michael Easton) and demand a conversation. He’ll state that they need to talk about his mother and their mutual father.

Chase’s parents are coming to town, so he may warn Finn not to cause trouble. That’ll be tough with Gregory (James Read) around, but Finn might agree to try. Meanwhile, Lulu (Emme Rylan) will find Maxie (Kirsten Storms) and declare that she’s so busted. Maxie will be surrounded by a beachball, shoes and other random junk. It appears she’ll be rummaging when she should be doing something else.

Elsewhere, Valentin (James Patrick Stuart) will speak with someone over the phone. He’ll tell the person on the other end that they have more important matters to deal with. Nina (Michelle Stafford) will end up scolding Valentin in Wednesday’s General Hospital episode. Perhaps his efforts to learn her secret will intensify.

Until then, Nina will have to handle Drew’s (Billy Miller) suspicions. He’ll insist that she’s been hiding something for the past couple weeks. Drew will think it’s time for Nina to come clean, but she obviously won’t be willing to do that. Will Nina deny all deception or simply make up a cover story? Regardless, Drew probably won’t be satisfied.

Over with Peter (Wes Ramsey), he’ll give Liesl Obrecht (Kathleen Gati) a warning. He’ll contend that she has to choose between her revenge and her freedom. Peter will suggest there’s no way Dr. O will get off the hook for this. He’ll believe Liesl needs to ditch her vengeful plot and remain a free woman.