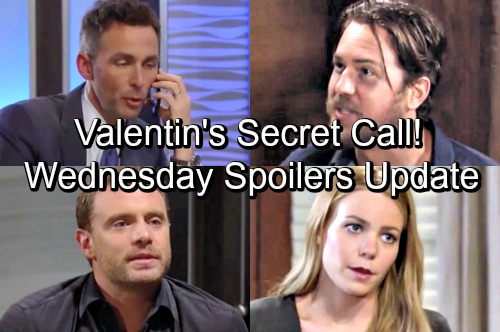 General Hospital (GH) spoilers update for Wednesday, July 11, tease that Peter (Wes Ramsey) will push Liesl (Kathleen Gati) to face the facts. Sooner or later, she’ll have to give up her hostage. Nina (Michelle Stafford) won’t let Liesl kill Peter, so she’s running out of options. Suspicions are growing in Port Charles, which means Liesl needs to make a crucial choice.

Peter will urge Liesl to consider her future carefully. Does she value revenge over her own freedom? That could be what she’ll sacrifice if she doesn’t back down. Over with Nina (Michelle Stafford), she’ll seem anxious during a chat with Drew (Billy Miller). He’ll call Nina out for keeping secrets and encourage her to spill them.

Sadly, Drew probably won’t get any closer to the truth. Nina isn’t the greatest secret-keeper in the world, but nervousness alone isn’t enough to prove anything. Drew will just have to keep digging if he wants solid information. Meanwhile, Valentin (James Patrick Stuart) will have a better plan. He’s apparently got minions seeking the details of Nina’s scheme.

Valentin will order someone to concentrate on what’s important before hanging up the phone. He’ll hope he can crack this case and help his wife, but Nina won’t appreciate his meddling. Elsewhere, Nelle (Chloe Lanier) will have a discussion with her lawyer. When she fills Michael (Chad Duell), she’ll bring up the prenuptial agreement and everything her attorney went over.

Will Nelle reluctantly go along with the idea or attempt to wiggle out of it? Is Michael hoping she’ll try some prenup sidestepping? Regardless, Michael won’t stray from his goal of taking Nelle down. No matter what, Michael will roll with the punches and work to keep the upper hand.

At GH, Chase (Josh Swickard) and Finn (Michael Easton) will bicker over family matters. Finn still resents their father for moving on so fast after his mother died. Nevertheless, Chase loves his parents and wants them to have a pleasant stay in Port Charles. General Hospital spoilers say they’ll be visiting for Chase’s birthday, so he may tell Finn to avoid his mom and their dad if he must.

Of course, Gregory (James Read) seems determined to make amends. He’ll undoubtedly track Finn down anyway, so there’s bound to be some good drama. Finally, Lulu (Emme Rylan) will spot Maxie poking around a junk pile. She’ll hint that she caught Maxie in the act, so perhaps her bestie isn’t supposed to be digging. Maybe Mommy duties await or Maxie already agreed to be someplace else.

However, Lulu will happily help Maxie with the task at hand. It looks like Maxie will be searching for something, so another pair of hands could be useful. General Hospital spoilers say some fun scenes are brewing. We’ll give you updates as other GH news comes in. Stick with the ABC soap and don’t forget to check CDL often for the latest General Hospital spoilers, updates and news.