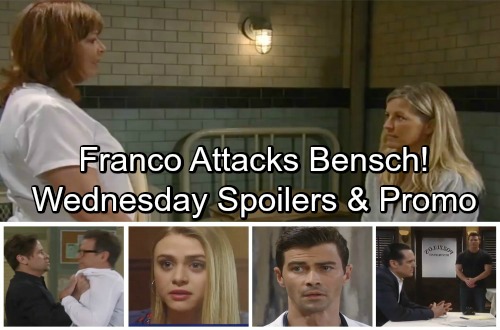 General Hospital (GH) spoilers for Wednesday, June 13, tease that Kiki (Haley Erin) will be ready for whatever comes her way. Liz (Rebecca Herbst) will be by her side as she moves forward with her civil suit. It’s great that Kiki has someone backing her up through all this.

Alexis (Nancy Lee Grahn) will let Kiki know what to expect and they’ll get the ball rolling. The process should bring some curveballs for Kiki, but she’ll hope to take a stand and show her strength. Meanwhile, Franco (Roger Howarth) will get updates on Dr. Bensch’s (James DePaiva) actions. After the sexual harassment story is spilled, Franco will be absolutely furious!

General Hospital spoilers say Franco will attack Dr. Bensch at GH, so be prepared for a fierce faceoff. The creepy doc will try to deny the accusations, but Franco won’t accept that. He’ll grab Dr. Bensch by the lab coat and hurl him against the wall.

Over with Ava (Maura West), it looks like she’ll also hear the news. Ava will wonder if this is why Griffin (Matt Cohen) and Kiki have been inseparable lately. She’ll lash out at Griffin for leaving her out of the loop, but he may argue he didn’t have all the facts. Griffin was aware of some bad behavior, but the evaluation threat and sex request are recent developments.

Of course, Griffin will continue to keep a huge secret from Ava. He hooked up with Kiki after the Nurses Ball, so that’ll be something else to enrage Ava eventually. In the meantime, Nina (Michelle Stafford) will find herself in a tight spot. Curtis (Donnell Turner) and Sam (Kelly Moncao) will insist that they need her help to catch Heinrik.

Since Nina is cahoots with Peter’s (Wes Ramsey) captor, this presents a real dilemma. She’ll try to protect both Liesl (Kathleen Gati) and herself from exposure, but it won’t be easy. At Ferncliff, Carly (Laura Wright) will get a visit from a nurse. After she’s informed of the rules, Carly will struggle to adjust to life in this miserable place. She’ll hope Jason (Steve Burton) can come through for her ASAP.

Other General Hospital spoilers say Mike (Max Gail) will give Sonny (Maurice Benard) an idea. When his dad offers a suggestion, Sonny will determine that it’s not a bad one. He’ll use it to come up with a plan to free Carly, but you can bet that a few snags are brewing.

Finally, Alexis will have some questions for Valentin (James Patrick Stuart). She’ll probably want info on the watch he provided. This mystery is really weighing on Alexis, so she’ll do whatever she can to get some answers. We’ll keep you posted as other GH details emerge. Stay tuned to the ABC soap and don’t forget to check CDL often for the latest General Hospital spoilers, updates and news.