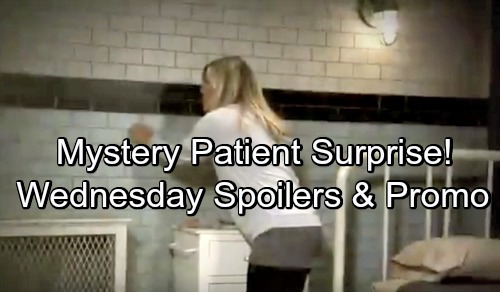 General Hospital (GH) spoilers for Wednesday, June 27, tease that Sonny (Maurice Benard) and Carly (Laura Wright) will savor their reunion. Mary Pat (Patricia Bethune) wasn’t happy about Sonny scoring a visit, but she was forced to suck it up and let him in. Carly will get some much-needed reassurance from her husband. He’ll just want Carly to stay positive and trust that revenge is coming.

While Sonny and Carly talk about Nelle’s (Chloe Lanier) takedown, there’ll be a startling interruption. The rowdy patient next door received some drugs to calm him down, but they might wear off eventually. Maybe Mr. Mystery will start tapping and shouting again.

It’s interesting that GH is letting Sonny in on this drama. That’s certainly one way to rev up the Morgan recast buzz. What if Sonny and Carly’s son is on the other side of that wall? Of course, the thought probably won’t cross Carly’s mind just yet.

Nevertheless, General Hospital spoilers say Carly will struggle to contain her questions. She’ll just want to know who’s trapped there and why he’s contacting her. Meanwhile, Alexis (Nancy Lee Grahn) will serve Julian (William deVry) with a subpoena and bring up their recent therapy session. Things got a little out of hand, but Alexis will still be thankful for Julian’s cooperation.

Once Kiki’s (Haley Erin) summoned, she’ll look forward to tearing Dr. Bensch (James DePaiva) to shreds. Kiki will count on Alexis to come through for her, but some unexpected twists could throw off her plans. It looks like Alexis may be forced to bow out, but Kiki will refuse to give up on this important case.

At GH, Francesca (Celesta DeAstis) will deliver a real bombshell. She’ll stop Michael (Chad Duell) in the hall and leave him absolutely stunned. Will Francesca confess her sexual harassment woes to board-member Michael? He can’t destroy Dr. Bensch singlehandedly, but his support could be a big help.

Of course, there’s also a chance Nelle’s been up to no good! If Francesca’s in the loop on a new secret, she may fill Michael in on the latest mayhem. Speaking of mayhem, Chase (Josh Swickard) will cause some of it across town. He’ll make Nelle squirm when he brings up the past and hints that more fallout’s coming.

However, Dante (Dominic Zamprogna) pointed out that Nelle trusted Chase. He thinks his partner should use that to his advantage. Chase can’t be nice right away, but he could slowly ease up and make Nelle drop her guard. That may be the strategy he kicks off with Wednesday’s tense meeting.

Other General Hospital spoilers say Franco (Roger Howarth) will get some tips from Liz (Rebecca Herbst). She’ll have ideas on how he can assist Kiki, but Franco will wish he could’ve done something to prevent her pain. He’ll feel terrible about what Kiki’s going through, but at least she knows Franco’s in her corner.

Finally, Ava (Maura West) will mull over her options. Griffin (Matt Cohen) will encourage her to stay on the straight and narrow, but the dark side will be calling Ava’s name. Kiki’s suffering, so Ava will want to do something about it. She’ll be tempted to strike back with danger and destruction!

Griffin will probably keep Ava under control for now, but he may not be able to tame her forever. We’ll give you updates as other GH news comes in. Stay tuned to the ABC soap and don’t forget to check CDL often for the latest General Hospital spoilers, updates and news.