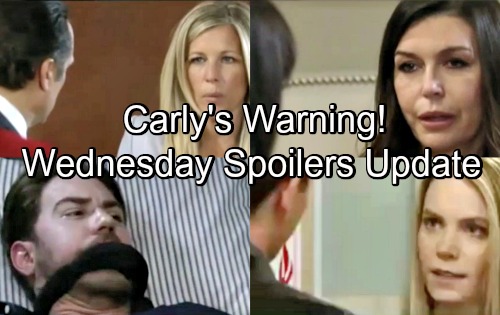 General Hospital (GH) spoilers update for Wednesday, June 6, tease that Robin (Kimberly McCullough) will be baffled as Anna (Finola Hughes) struggles to explain. During their visit, Anna will discuss her sex session with Faison (Anders Hove) and the pregnancy that followed. She’ll begin to cry as she confesses, but Robin won’t understand what any of this has to do with Peter August (Wes Ramsey).

Anna will finally admit that Peter’s her long-lost son, which makes him Robin’s half-brother. General Hospital spoilers say Robin will get emotional over her mother’s secrets. She’ll wonder what else has been kept from her over the years. This could shatter the trust they share, but Anna will hope she can rebuild it eventually.

It looks like Finn (Michael Easton) could also endure a tough visit with a relative. James Read will debut as Gregory Chase, Finn and Chase’s (Josh Swickard) father. He’ll first pop up on Wednesday’s new GH episode, so Finn may run into him during this trip to Berkeley. Of course, Gregory will likely head back to Port Charles soon enough. GH needs to take advantage of all the family drama!

Meanwhile, Peter will still be at Liesl Obrecht’s (Kathleen Gati) mercy. She’ll approach him with a massive knife and hint that she’s got a lot in store for him. Dr. O doesn’t intend to kill Peter, but she certainly hopes she can take a toll on his mind. General Hospital spoilers say Peter will wonder if he’s ever going to get out of this jam.

Across town, Nina (Michelle Stafford) will stick to her goal of splitting up. She’ll refuse to let Valentin (James Patrick Stuart) suck her back in for more heartache. As a result, Nina will reach out to Alexis (Nancy Lee Grahn). She’ll urge this top-notch lawyer to handle the divorce for her.

Over with Julian (William deVry), he’ll finally get in touch with Kim (Tamara Braun). Since Julian hasn’t seen much of her lately, he’ll guess it’s because of Alexis. Julian bailed on Kim to comfort his ex, so he’ll think she could be miffed about that.

Kim was clearly a hint disheartened, but they’ve established that they’re hung up on former flames. She’s been busy trying to save Drew’s (Billy Miller) life, so she’ll understand why Julian had to be there for Alexis. Elsewhere, Michael (Chad Duell) will get updates on Nelle’s (Chloe Lanier) subpoena. She’ll confess that she has to go to court and testify against his mom.

Carly (Laura Wright) will be gearing up for a big battle, but she’ll find out there are some new concerns. Diane (Carolyn Hennesy) will suggest that one person in particular could cause trouble. It’s possible she means Nelle, but Jason (Steve Burton) seems more likely. He agreed to testify about facts that didn’t add up, but he just can’t lie about Carly going insane.

Diane will probably suggest that she can be careful about her line of questioning, but she can’t control how DA Margaux Dawson (Elizabeth Hendrickson) proceeds. Once Jason’s on that stand, anything can happen! We’ll keep you posted as other GH news comes in. Stay tuned to the ABC soap and don’t forget to check CDL often for the latest General Hospital spoilers, updates and news.