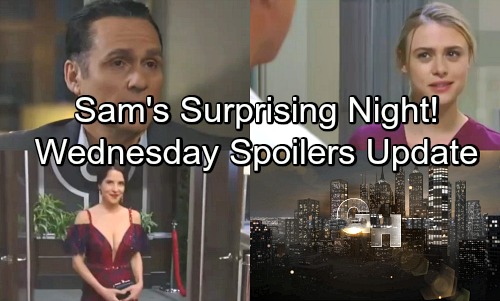 General Hospital (GH) spoilers for Wednesday, May 16, tease that some stylish characters will be walking the red carpet. It’s time for 2018’s Nurses Ball, so GH viewers will want to check it out. Nick Viall will be on hand to host pre-show. He’ll speak with many of the gorgeous guys and gals on their way in. Franco (Roger Howarth) and Liz (Rebecca Herbst) will be among the spiffy partygoers.

Despite all of Carly’s (Laura Wright) drama, Josslyn (Eden McCoy) will try to relax. Oscar (Garren Stitt) will do his best to keep Joss’ mind off her troubles, so let’s hope they can really let loose. Meanwhile, Peter (Wes Ramsey) will give Maxie (Kirsten Storms) a touching present before they attend. It’ll bring them closer, but their date night means Sam (Kelly Monaco) will have to show up alone.

Fortunately, Sam’s strong and confident. She had hoped to take Maxie to this gathering, but she’ll be perfectly fine on her own. Who knows? Maybe Sam will spend some time with Jason (Steve Burton) or Drew (Billy Miller) on this special evening. There’ll definitely be a change of plans on Wednesday, so we’ll see if her luck turns around.

However, Jason will have some important matters to take care of. He’ll team up with Spinelli (Bradford Anderson), so they might get some new ideas on how to find Heinrik. Jason will also listen to Sonny’s (Maurice Benard) fears about Carly. After all the chaos and strange ordeals, Sonny’s convinced that his wife’s unraveling. He’ll open up to Jason and hope that they can help Carly get a grip.

Other General Hospital say Finn (Michael Easton) will find his date absolutely stunning. Alexis (Nancy Lee Grahn) will knock Finn’s socks off with her fabulous dress, hair and makeup. At GH, Dr. Bensch (James DePaiva) will show his softer side again. Kiki (Haley Erin) will worry that she’s being manipulated and that’s obviously the case. Dr. Bensch will do something nice with a goal in mind.

Perhaps the doc will urge Kiki to go watch Ava (Maura West) perform. Kiki should be surprised if Dr. Bensch makes that suggestion. He wouldn’t even let her off to look for her missing sister! Since Dr. Bensch wouldn’t budge after Avery (Ava and Grace Scarola) disappeared, Kiki would be confused over a free pass for the Nurses Ball.

Across town, Robin (Kimberly McCullough) and Anna (Finola Hughes) will have a sweet reunion. They’ll embrace and get ready for the big shindig together. Robin may suspect that Anna’s hiding something, but it should be tough to pry any details out of her. General Hospital spoilers say Emma (Brooklyn Rae Silzer) will be back for Nurses Ball fun as well, so stay tuned.

Elsewhere, Olivia (Lisa LoCicero) will have a major meltdown. She’ll be freaking out, but a surprising chef will reluctantly rescue her. You might know Carla Hall as a co-host on ABC’s The Chew. She’ll appear as a quirky character who helps Olivia with a cooking crisis.

It sounds like General Hospital has some great surprises in store. We’ll give you updates as other GH news comes in. Stick with the ABC soap and don’t forget to check CDL often for the latest General Hospital spoilers, updates and news.