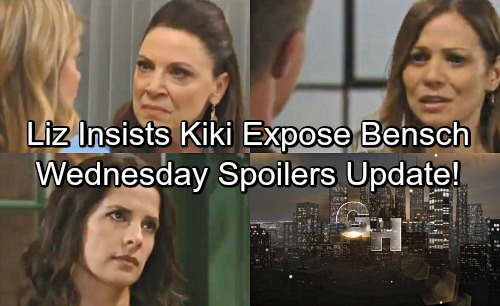 General Hospital (GH) spoilers update for Wednesday, May 30, tease that Liz (Rebecca Herbst) will try to comfort Kiki (Haley Erin) and point her in the right direction. She’ll insist that Kiki has to take a stand against sexual harassment. Dr. Bensch’s (James DePaiva) behavior is unacceptable and he needs to pay for it.

Kiki may still have concerns about making accusations, but it looks like she’ll gather up her courage soon enough. She can’t let Dr. Bensch derail her career for no reason and she certainly can’t give him what he wants. Elsewhere, Lucas (Ryan Carnes) will express some doubt about the adoption. He’ll let Julian (William deVry) know he’s cautious about getting his hopes up.

The anonymous birth mother could still back out, so Lucas isn’t quite ready to plan his family. He’ll be happy if things work out, but it seems he’s not holding his breath either. Julian will offer reassurance and wonder if there’s anything he can do. He just wants Brad (Parry Shen) and Lucas to get the sweet family they’re dreaming of.

Peter will indeed face a sneak attack by the end of the week and Liesl is our top suspect. However, Peter needs to score his freedom first. He’ll push Drew (Billy Miller) to help him out with that in exchange for his memories. Peter will promise Drew that he can recapture what he’s lost. Drew just has to be willing to make this deal.

Of course, Drew’s pretty stubborn and he seems to think he can do this without the flash drive anyway. He may leave Peter hanging, but Anna’s (Finola Hughes) not going to let her son go down. You can bet Peter will wiggle out of this jam somehow.

Over with Curtis (Donnell Turner), he’ll tell Sam (Kelly Monaco) they should join forces. Since Drew’s not very interested in the flash drive, Sam and Curtis may have to track it down. Drew needs it more than he realizes, so this mission behind his back could pay off.

General Hospital spoilers state that Kim (Tamara Braun) will work on a scheme of her own. She’ll corner Jason (Steve Burton) and ask for his assistance. Kim might suggest that this about Drew, which would undoubtedly cause Jason to dismiss her. He may argue that his brother wants nothing to do with him, so there’s no point in getting involved.

Nevertheless, Kim will push Jason to listen to what she has to say. She’ll feel confident that Jason can come through for her, so he should let Kim make her spiel. Across town, Alexis (Nancy Lee Grahn) will deal with Valentin (James Patrick Stuart) drama. He’ll pester her in Wednesday’s GH episode, but will she give him the help he desires? That may be the only way to get Valentin off her back!

It sounds like some excitement’s coming up in Port Charles. We’ll give you updates as other GH news emerges. Stick with the ABC soap and don’t forget to check CDL often for the latest General Hospital spoilers, updates and news.