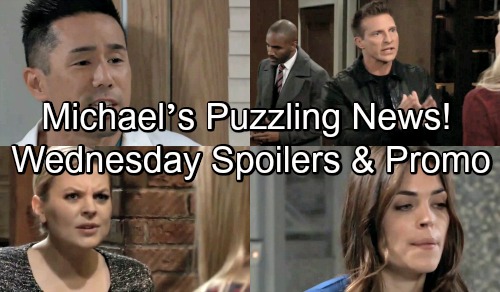 General Hospital (GH) spoilers for Wednesday, November 7, tease that Nina (Michelle Stafford) will battle some guilt. When she meets up with Maxie (Kirsten Storms), Nina will mention her recent birthday. She’ll assume Maxie spent it alone, so she’ll be sorry she wasn’t there for her.

However, Maxie will shut down the pity party. She’ll note that Peter (Wes Ramsey) brought her a cake and made her birthday extra special this year. Nina may have concerns about how close they’re getting, but Maxie may give her usual “he’s my friend” speech. She’s determined to let Peter back in her life, so they’ll continue to bond in the weeks ahead.

In the meantime, Michael (Chad Duell) will face some confusion. During a chat with Bobbie (Jacklyn Zeman), he’ll learn some puzzling info that ties in with Brad (Parry Shen) and Lucas (Ryan Carnes). Bobbie will seem upset over something she spotted at their place. That’ll prompt questions from Michael. He won’t get why Bobbie seems so rattled, but she’ll do her best to explain.

Of course, Bobbie may not want to say too much. Perhaps she just saw all “Wiley’s” baby belongings and felt a wave of sadness for Michael. If anyone’s going to blow the lid off this swap scheme, it’s not going to be Bobbie. She isn’t a key player in this storyline, so Michael will have to find out the truth another way.

Speaking of the truth, Brad just dropped a bomb on Britt (Kelly Thiebaud). He revealed that “Wiley” isn’t his son, so Britt will push him to elaborate on Wednesday. General Hospital spoilers say Brad will spill at least part of the story. Once he comes clean about the switch, he’ll get some reassurance. Britt will think Brad can handle this, but he’ll insist that the secret is going to destroy his life.

Across town, Carly (Laura Wright) will have doubts about the plan. She needs answers about the mystery patient at Ferncliff, so Jason (Steve Burton) intends to get them. Nevertheless, it seems Carly will consider dropping the whole idea. She may not want to go down that road again, but Jason will think it’s necessary for closure.

Despite Carly’s reservations, Jason will think this is a beneficial mission. He’ll argue that if it helps Carly put Ferncliff behind her, it’s worth it. At some point on Wednesday, Carly will also cause an unexpected interruption for Laura (Genie Francis). They may chat about Ferncliff and the recent election tampering.

Next, Laura will corner “Kevin” aka Ryan (Jon Lindstrom) at GH. She’ll decide to be blunt and argue that there’s a third person in their marriage. Laura recently spotted “Kevin” bonding with Ava (Maura West), so her name might come up. Regardless, this conversation won’t change Ryan’s mind about anything. He’ll press on with the separation and hope Laura stays out of his business.

It sounds like some hot drama’s coming up on General Hospital. We’ll give you updates as other GH news emerges. Stick with the ABC soap and don’t forget to check CDL often for the latest General Hospital spoilers, updates and news.