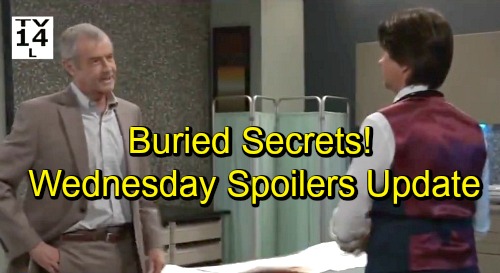 General Hospital (GH) spoilers update for Wednesday, October 10, tease that Josslyn (Eden McCoy) will stick to the plan. Despite Oscar’s (Garren Stitt) repeated attempts to push her away, Joss can’t let go of their relationship. It’s clear to her that something more’s going on.

As a result, Josslyn will want to hang in there and take whatever Oscar dishes out. If that’s what it takes to get through to him, then so be it. Josslyn doesn’t know what Oscar’s dealing with, but she’ll assure Cameron (William Lipton) that she’s going to help him through it.

At GH, Kim (Tamara Braun) will also hope to talk some sense into Oscar. She’s eager to get him signed up for the clinical trial, but Oscar will continue to drag his feet. General Hospital spoilers say Oscar will simply throw in the towel. He’ll argue that there’s no use in fighting his deadly fate.

Of course, Kim won’t stand for that. She’ll contend that Oscar’s not done yet, but he’ll fire back that he most certainly is. Oscar might explain that he sought legal advice and intends to make his own decisions. He’s tired of letting Kim and Drew (Billy Miller) have all the control here.

If Oscar can prove Drew and Kim aren’t acting in his best interest, he won’t have to participate in the experimental treatment. Since this trial could make things worse for Oscar, he might actually have a case. You can bet Oscar will at least give this strategy a shot.

Once Kim updates Drew on Oscar’s plans, he’s sure to be upset. However, Drew will face a different dilemma in the meantime. This one will involve Margaux (Elizabeth Hendrickson) and the proposal she mentioned. Will Margaux offer the flash drive in exchange for Sonny (Maurice Benard) takedown assistance? She’ll have to do it sooner or later, so it might as well be now.

Other General Hospital spoilers say Finn (Michael Easton) will cause a blowup. GH fans know Gregory (James Read) wants to make amends and bond with both his boys. His relationship with Chase (Josh Swickard) is on solid ground, but Finn has no desire to connect.

That won’t stop Gregory from making an effort, but Finn will just keep shutting his dad down. Gregory will finally rip into Finn for causing so much drama. He won’t understand why Finn insists on clinging to his grudge. These two need to bring their buried issues to the surface and sort them out.

Elsewhere, Jason (Steve Burton) and Sonny (Maurice Benard) will debate the threat Margaux poses. Carly (Laura Wright) will feel like this gal’s going to be trouble and Jason will back her up. Sonny will want to just keep his head down and avoid escalating this any further. However, Jason will think they have to be proactive. Margaux’s coming for Sonny, so they have to be prepared for anything.