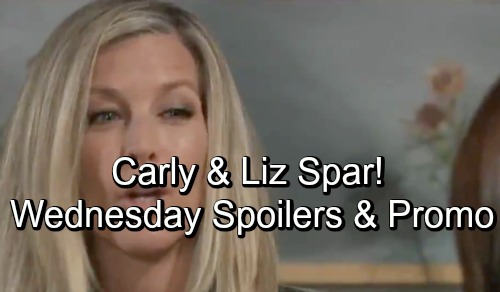 General Hospital (GH) spoilers for Wednesday, October 24, tease that Olivia (Lisa LoCicero) will have some advice for Julian (William deVry). It looks like she’ll sense that he’s smitten with Kim (Tamara Braun), so she’ll feel the need to weigh in. Olivia will note that Julian’s got a good thing going, so he shouldn’t blow it. She won’t want to see Julian’s love life end in disaster again.

Julian will agree with that and thank Olivia for being in his corner. He’ll hope he can keep supporting Kim and make her feel loved. In the meantime, Kim will be focused on her son. She’ll track down Sam (Kelly Monaco) and deliver a surprising proposal.

Kim will insist that Sam can help her save Oscar, but can she really? Kim will probably want Sam to have a chat with Alexis (Nancy Lee Grahn) and convince her to stand down. She’s desperate to throw some fast hurdles Oscar’s way before it’s too late.

Across town, Oscar will find Cameron (William Lipton) and demand some answers. He’ll want to know why Cam’s been spending so much time with Josslyn (Eden McCoy). Will Cameron come clean about her fake boyfriend scheme or let Oscar assume what Joss wants? Regardless, Oscar isn’t going to be happy about their growing bond.

Other General Hospital spoilers say Drew (Billy Miller) will pass along some bad news. He was supposed to be Curtis’ (Donnell Turner) best man, but he’ll have to back out. Drew will probably argue that it’s too much to take on right now. His family’s in GH crisis mode, so he has to concentrate on Kim and Oscar.

Elsewhere, Carly (Laura Wright) and Liz (Rebecca Herbst) will face some tension. They’ll most likely exchange harsh words over their teens, but things won’t get too out of hand. Carly will just want to make sure they’re on the same page. She may suggest that Cameron shouldn’t take advantage of Joss when she’s vulnerable. Carly might tell Liz to keep an eye on her son and rein him in if need be.

General Hospital spoilers say Carly will speak with Laura (Genie Francis) as well. Laura’s been having some marriage troubles, so she may open up about “Kevin” aka Ryan (Jon Lindstrom). He’s creating distance between them, which will only get worse due to Laura’s new plan.

Thanks to “Kevin’s” suggestion, Laura will consider running for mayor again. She’ll ultimately decide to go for it, but that’ll mean more hours away from “Kevin.” Of course, that’s exactly what Ryan’s counting on! He’ll hope to plot murder and destruction while Laura’s working on her write-in campaign.

GH has some fantastic scenes in store for us. We’ll give you updates as other details emerge. Stay tuned to the ABC soap and don’t forget to check CDL often for the latest General Hospital spoilers, updates and news.