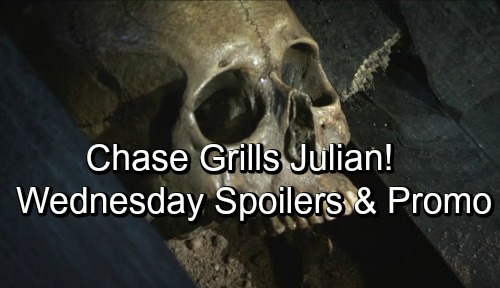 General Hospital (GH) spoilers for Wednesday, September 12, tease that Franco (Roger Howarth) will run into Drew (Billy Miller) and pose some questions. He’ll wonder if he can pick Drew’s brain about something, but this sounds like a bad idea. Franco recently had a minor disagreement with Liz (Rebecca Herbst). Their issues revolved around parenting, so Franco may want Daddy Drew’s advice.

Of course, Drew’s sensitive to any parenting drama right now. He’s got enough of it going on thanks to Oscar’s (Garren Stitt) brain tumor and Kim’s (Tamara Braun) opinion on it. Drew may seem standoffish as a result. In the meantime, Liz will find Kim and ask what the prognosis is. She’ll want to know what Kim’s up against so she can offer support.

Across town, Oscar and Cameron (William Lipton) will get into a fight. After Cam admits he kissed Josslyn (Eden McCoy), Oscar’s anger will explode. He’ll end up punching Cameron in the face, which could kick off a real brawl between them.

At Charlie’s Pub, Chase (Josh Swickard) will grill Julian (William deVry) about his latest discovery. He just found a skull and presumably some other bones to go along with it. The gun is probably just waiting to be found as well. Chase will sit down with Julian in Wednesday’s episode. He’ll ask if Julian knew there was a body in his basement, but Julian will insist this is the first he’s hearing about it.

Ava (Maura West) will be on hand to get the scoop and throw in her two cents. She’s the kind of gal who speaks her mind, so maybe she’ll have some advice for Julian. With any luck, this could turn into some leverage for Ava down the road. She may need it if the truth about her involvement with Nelle (Chloe Lanier) comes out.

Other General Hospital spoilers say Mike (Max Gail) will have a tough realization. He’ll suggest that he’s getting worse, but Sonny (Maurice Benard) and Carly (Laura Wright) will try to calm him. It looks like they’ll just suggest that Mike needs more help than they can give.

Elsewhere, Finn (Michael Easton) and Robert (Tristan Rogers) will catch up. They might discuss the recent kidnapping case and any loose ends. Cassandra’s (Jessica Tuck) disappearance is a big one, so that’ll give GH somewhere to go with all this.

Over with Anna (Finola Hughes), she’ll get a special visitor. General Hospital spoilers say Robin (Kimberly McCullough) will show up, so Anna will just want to know if her daughter forgives her. Robin was upset about the Peter (Wes Ramsey) bombshell, but she’s had time to process the news. Anna and Robin should be able to repair the damage soon enough.

Another great GH episode’s on the way. We’ll give you updates as other details emerge. Stay tuned to the ABC soap and don’t forget to check CDL often for the latest General Hospital spoilers, updates and news.