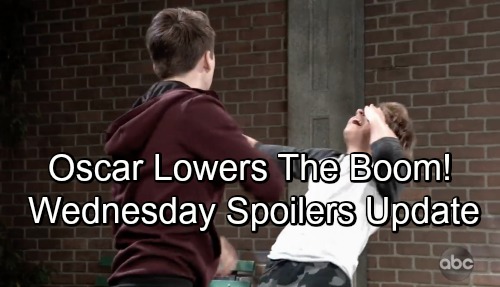 General Hospital (GH) spoilers for Wednesday, September 12, tease that Cameron (William Lipton) and Oscar’s (Garren Stitt) feud will erupt. There’s naturally some tension between them since they’re drawn to the same girl. Josslyn (Eden McCoy) has captured both their hearts, so that’ll remain a huge issue. When Oscar finds out Cam kissed Joss, he’ll blow his top and deliver a blow to his rival’s nose.

Elsewhere, Liz (Rebecca Herbst) will seek the latest news from Kim (Tamara Braun). She’ll ask about Oscar’s prognosis, but the look on Kim’s face will say it all. Oscar will face a grim fate without some type of miraculous breakthrough. Kim won’t know how she’ll ever cope without Oscar in her life, so she’ll need Liz’s support as she struggles.

Over with Franco (Roger Howarth), he’ll encounter Drew (Billy Miller) and wonder if he could get a favor. Franco will want some guidance from his sort-of friend. He recently had a parenting hiccup with Liz, so Franco may ask for Drew’s opinion. It’s clear that Franco wants to be a better man and serve as a decent father to Liz’s boys.

Other General Hospital spoilers say Mike (Max Gail) will be in bad shape. He was deeply disturbed by all the drama at Charlie’s Pub, which his actions caused. Mike doesn’t remember much about what happened, but he’ll sense that Sonny (Maurice Benard) and Carly (Laura Wright) are concerned. He’ll assume he’s getting worse and immediately break down in tears.

Meanwhile, Julian (William deVry) will get updates on the body in the basement. He’ll assure Chase (Josh Swickard) that he had no idea it was down there. Chase won’t be sure what the real story is, but he’ll definitely want to find out. Ava (Maura West) will get the scoop, so maybe she can score details and get some blackmail material later. You never know when that’ll come in handy against Sonny!

At Anna’s (Finola Hughes) place, Finn (Michael Easton) will come downstairs to find Robert (Tristan Rogers). He’ll wish Agent Scorpio a good morning before they rehash the recent abduction mayhem. Finn and Anna are both safe back in Port Charles, but Cassandra’s (Jessica Tuck) still out there somewhere. Robert might divulge some new leads and get Finn to weigh in on them.

Afterward, GH spoilers say Robin (Kimberly McCullough) will come home for a visit. Anna will be pleased to see her daughter, but she’ll also be a bit apprehensive. She’ll just want to know if Robin can offer forgiveness. At first, Robin needed time to accept Anna’s big secret. She had to make sense of the fact that her brother is Heinrik Faison aka Peter August (Wes Ramsey).

Now Robin has cooled off and dealt with her feelings. Anna’s got the kidnapping angle working for her, too. She could’ve died if something had gone wrong, so the thought of losing Anna might’ve softened Robin. General Hospital spoilers hint that they’ll begin the slow process of healing in Wednesday’s episode.

It sounds like some terrific scenes are coming up. We’ll keep you posted as other GH details emerge. Stick with the ABC soap and don’t forget to check CDL often for the latest General Hospital spoilers, updates and news.