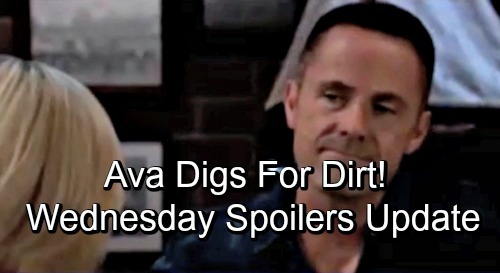 General Hospital (GH) spoilers for Wednesday, September 19, tease that Michael (Chad Duell) will confide in Carly (Laura Wright). He’s doing his best to put Jonah’s death behind him, but moving on is a definite struggle. As they talk at GH, Michael will admit that he’s not doing very well. The pain of this loss is really taking a toll.

Carly will insist that Michael doesn’t have go through this alone, but he may continue to bottle up his feelings. Michael might find it tough to put his thoughts into words and accept help. Of course, General Hospital fans know Jonah is actually alive. He’s living as “Wiley” with Brad (Parry Shen) and Lucas (Ryan Carnes), so that’ll be a bomb for GH to drop later.

In the meantime, Maxie (Kirsten Storms) will explain a tricky situation to Nina (Michelle Stafford). After she’s asked about the elevator incident, Maxie will make it clear that nothing steamy went down. She’ll note that Peter (Wes Ramsey) just got overheated thanks to his panic attack. That’s why he was shirtless and out of breath when he scampered off the lift.

Nina will still think a little too much bonding was going on. She’ll probably warn Maxie to be careful about how much she trusts Peter. Likewise, Lulu (Emme Rylan) will also watch out for Maxie’s heart. Peter will let Lulu know that he doesn’t intend to hurt Maxie, but Lulu will offer a warning anyway. She won’t want Peter preying on Maxie’s vulnerability or causing any additional sorrow.

Other General Hospital spoilers say Valentin (James Patrick Stuart) will be cautiously optimistic. He’ll learn that Curtis (Donnell Turner) met with Nina’s potential daughter, who agreed to take a DNA test. Valentin will realize this isn’t a done deal yet, but at least the search has led somewhere. Whether this is the right girl or not, they certainly haven’t been hitting dead ends.

At GH, Griffin (Matt Cohen) will have a heavy heart. He’ll tell Kiki (Hayley Erin) about some devastation he just faced. Griffin will believe everything he cared about has been taken away, so that suggests Monica (Leslie Charleson) opted not to reinstate him. The titles of priest, boyfriend and doctor could all be gone now.

Regardless, Kiki will assure Griffin that he’s still got her friendship. That should mean a lot to him as he tries to cope. General Hospital spoilers say Griffin and Kiki could become more than pals soon enough. As for Griffin’s job, we’re willing to bet he’ll find a way back on staff at GH. Oscar (Garren Stitt) might need some help that only Griffin can give.

Across town, Julian (William deVry) will try to keep his guard up around Ava (Maura West). She’ll believe he’s holding out on her, so this may be about his Sonny (Maurice Benard) secrets. Ava can’t be trusted with any info that could bring down Sonny. She’d inevitably use it to her advantage and wreak havoc!

Nevertheless, Ava will keep snooping. It’d be good for her to have some leverage in case her involvement with Nelle (Chloe Lanier) comes to light. We’ll give you updates as other GH news comes in. Stick with the ABC soap and don’t forget to check CDL often for the latest General Hospital spoilers, updates and news.