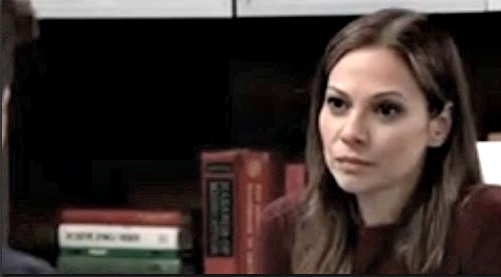 General Hospital (GH) spoilers for Wednesday, September 26, tease that Anna (Finola Hughes) will see through Finn’s (Michael Easton) charade. She’ll insist that he’s more interested in his father’s case than he’s letting on. Anna understands there are some old wounds to deal with, but Gregory’s (James Read) health is what matters here. She’ll hope Finn can at least view this as an interesting challenge.

Meanwhile, Brad (Parry Shen) will keep working on Julian (William deVry). Although Julian isn’t keen on making a move, Brad will think there must be something they can do. However, he’ll also worry that their digging could come back to bite them. This is a messy situation and it’s only going to get messier as the weeks go by.

Other General Hospital spoilers say Sam (Kelly Monaco) will feel stuck. She may land in the middle of Alexis (Nancy Lee Grahn) and Kristina’s (Lexi Ainsworth) next round of conflict. As Sam rolls her eyes, Kristina will appear and ask if the firing squad’s gone. She may be at odds with their mother for the thousandth time.

GH fans can expect Sam to speak up for Alexis. Maybe she’ll want Kristina to see things from their mom’s perspective. Over with Josslyn (Eden McCoy), she’ll face some cryptic hints from Cameron (William Lipton). As she grows frustrated, Joss will tell Cam to come out with it already. She’ll just want him to say whatever it is he has to say.

Cameron will probably stay quiet about his cancer suspicions, but Oscar (Garren Stitt) can’t keep this a secret forever. He’ll have to find a way to admit his diagnosis, but that could be even harder than hearing it himself. For now, Oscar will take off and leave his parents hanging. It looks like Drew (Billy Miller) and Kim (Tamara Braun) will fear the worst when they can’t find Oscar anywhere.

Chase (Josh Swickard) will do what he can to track the teen down. He’ll ask if there’s anyone Oscar would contact at a time like this. It turns out Jason’s (Steve Burton) the one Oscar will reach out to. When Oscar finds his uncle, he’ll decide to make a confession. Oscar will suggest that if he doesn’t tell someone, he’s going to explode. He’ll reveal that he’s dying, so Jason will be sure to offer support.