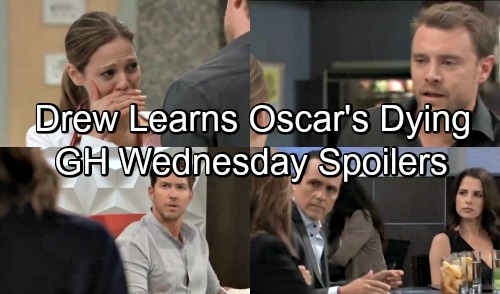 General Hospital (GH) spoilers for Wednesday, September 5, tease that Alexis (Nancy Lee Grahn) will have a surprising suggestion. Before she spills it, she’ll sit down for a chat with Sonny (Maurice Benard), Sam (Kelly Monaco) and Kristina (Lexi Ainsworth). It looks like Kristina will admit she’s moving back to town and needs a career plan.

Kristina may hope she can pick up shifts as a bartender somewhere, but Alexis might have something else in mind. She’ll contend that she has the perfect job for her daughter, but Kristina won’t seem convinced. Meanwhile, Chase (Josh Swickard) and Finn (Michael Easton) will make progress in their relationship. They’ll take more steps toward peace and finally begin to bond as brothers.

Chase will also have big news to pass along, so this could involve the Cassandra (Jessica Tuck) case. Perhaps he’ll have some new leads on who took Cassandra and where she might’ve ended up. Over with Anna (Finola Hughes), she’ll drop by to see Peter (Wes Ramsey). Unfortunately, he won’t exactly give Anna a warm welcome to his office.

Things will remain strained between Anna and Peter for now, but maybe they can connect sooner or later. Anna truly wants a relationship with her son, so she might get one if she works hard enough. In the park, Josslyn (Eden McCoy) will get a shocking phone call. Oscar (Garren Stitt) will groggily tell Joss not to freak, but she’ll already look panicked by the tone of his voice.

Oscar will confess that he’s at GH, so Josslyn will rush right over. Cameron (William Lipton) will visit General Hospital as well and immediately get the scoop on Oscar’s collapse. Liz (Rebecca Herbst) will corner Cam and wonder why the two of them were together. She’ll ask what Cameron was even doing with Josslyn in the first place.

Cam will sport a guilty expression, which is understandable since he just stole a kiss from Oscar’s girlfriend. He has feelings for Joss, but they won’t matter in these dire moments. Josslyn will only care about making sure Oscar’s OK. It sounds like Cam and Joss will keep their lip lock a secret, which is for the best since Oscar’s got enough drama to tackle.

Other General Hospital spoilers say Drew (Billy Miller) will seek answers. He’ll push an emotional Kim (Tamara Braun) to divulge what’s wrong with their son. Kim will admit that Oscar’s dying and there isn’t anything she can do about it. Oscar isn’t in the loop yet, so that’ll make this whole ordeal even tougher.

General Hospital fans can expect Drew and Kim to come together for their boy’s sake. They’ll do whatever they can to help Oscar’s survive the battle ahead. We’ll give you updates as other GH details emerge. Stay tuned to the ABC soap and don’t forget to check CDL often for the latest General Hospital spoilers, updates and news.