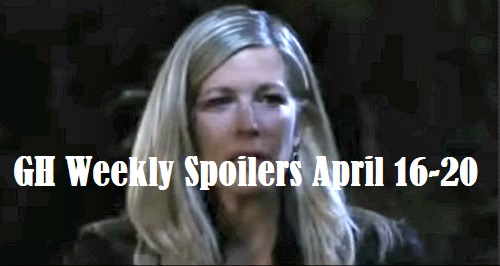 General Hospital (GH) spoilers for the week of April 16-20 tease that we’ll see some distraught PC residents. First, Sonny (Maurice Benard) will have to deal with Mike (Max Gail) and Avery (Ava Scarola) drama. While the nanny was buying some soft pretzels, Mike suddenly fled with the tot. Sonny will do his best to nail down where Mike might’ve rushed off to. He’ll be worried sick as the hours go by.

Meanwhile, Carly (Laura Wright) will dig around near the area where Morgan (Bryan Craig) was killed. She’ll hope to make sense of the message she received, but another message is headed her way. Carly will soon realize it was a big mistake to leave the nanny alone with Mike and Avery. This ordeal could’ve been prevented if Carly had headed over to the park as planned.

Once Ava’s (Maura West) brought into this, she’ll really let Carly have it. Nevertheless, the whole gang will have to work together. Carly, Sonny and Ava will put aside their animosity to find the little girl they all care about. There’ll naturally be some concerns about Mike as well. GH fans can expect some twists and turns as this search revs up.

Josslyn (Eden McCoy) will face some overwhelming moments later. She’ll probably be taken aback by all the issues surrounding Mike, Avery and even Carly (Laura Wright). family is definitely going through a period of unrest. Sonny will tack on another problem when Chase (Josh Swickard) comes around. He’ll be desperate to keep his “field in Croton” secret under wraps.

Other General Hospital spoilers say Spinelli (Bradford Anderson) will end up in jail over his botched mission. That’ll spark another one for Jason (Steve Burton) and Sam (Kelly Monaco). They’ll realize Spinelli could use to help to score his freedom. Sam will be ready to rock and roll, but she’ll eventually fear she jumped the gun. She’ll take a step back for her kids’ sake and reevaluate the situation.

Elsewhere, Liz (Rebecca Herbst) will give Franco (Roger Howarth) a pep talk. He’s still trying to process all the Jim Harvey (Greg Evigan) revelations, but he’s glad to have Liz on his side. General Hospital spoilers state that Liz will remind Franco of her love and support. She’ll assure him that they’re going to get through this together.

Over with Kim (Tamara Braun), she may push Julian (William DeVry) away. Kim will urge him to concentrate on his family, which could be code for ending their fling. Perhaps Kim’s too stuck on Drew (Billy Miller) to give Julian much attention anymore.