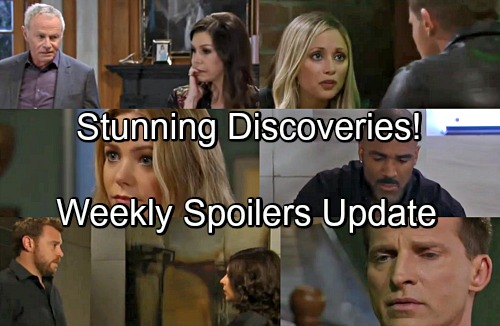 General Hospital (GH) spoilers for the week of April 30 through May 4 tease that we’ll see many secrets and shockers. First, Curtis (Donnell Turner) will locate some interesting info in Peter’s (Wes Ramsey) office. He’ll hope this could be a big break in the case. Once Curtis fills Nina (Michelle Stafford) in, she’ll insist that he should dig deeper. Nina will feel like they’re so close to exposing Peter’s dark side.

Meanwhile, Peter will remain quite relaxed. He got a bit rattled back when Griffin (Matt Cohen) confronted him, but he’s regained his confidence now. In fact, Peter may be just a bit too cocky! He seems to be setting himself up for trouble, but he’ll just have to learn that lesson the hard way.

General Hospital spoilers say Maxie and Peter will continue to bond this week. Their friendship could start leaning toward a romance soon enough. Elsewhere, Drew (Billy Miller) will deliver some encouraging words. Perhaps he’ll be there for his frenemy, Franco (Roger Howarth). It looks like Franco will meet with another one of Jim Harvey’s (Greg Evigan) victims soon, so he’ll definitely need support.

At GH, Kiki (Haley Erin) will face another difficult day in the shadow program. General Hospital spoilers say Dr. Bensch (James DePaiva) will dish out nothing but criticism. He’ll ignore anything positive Kiki has to offer and find faults where there are none. Kiki’s a hard worker and a fast learner, but her rejection obviously set Dr. Bensch off. She’ll wonder how much more of this she can take!

Across town, Anna (Finola Hughes) will catch Jason (Steve Burton) by surprise. Will she suggest that she’s backing off the Heinrik hunt? Thanks to some new revelations about Valentin (James Patrick Stuart), Anna may worry about Jason getting to close to the truth. She doesn’t want anyone else to find out about her connection to Heinrik, so Anna will have her work cut out for her.

Over with Lulu (Emme Rylan), she’ll tell a few fibs to her concerned hubby. Dante (Dominic Zamprogna) will push Lulu for info on her latest assignment, but she’ll leave out some crucial details. Lulu knows Dante wouldn’t be happy about what she’s cooking up, but he won’t be happy about her deception either. This is sure to blow up in Lulu’s face eventually.

Ava (Maura West) will also force Sonny (Maurice Benard) to choose between Avery (Ava and Grace Scarola) and Mike (Max Gail) this week. His tough decision will bring plenty of Corinthos family chaos. We’ll give you updates as other GH news comes in. Stay tuned to the ABC soap and don’t forget to check CDL often for the latest General Hospital spoilers, updates and news.