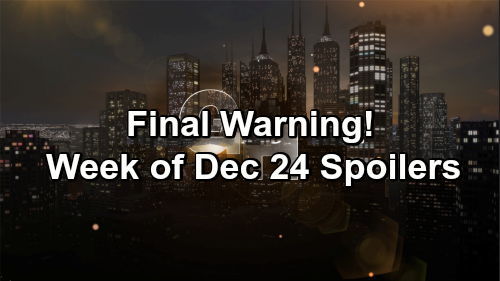 General Hospital (GH) spoilers for the week of December 24-28 tease that some unpleasant surprises are in store. Kevin (Jon Lindstrom) will get an unexpected horrible visit from Ryan (Jon Lindstrom) and he won’t be happy about it. Their interaction will bring more torture for the locked up shrink.

Over with Lulu (Emme Rylan), she’ll do some digging and pass along some news to Laura (Genie Francis). Lulu couldn’t pry any murder case info out of Chase (Josh Swickard), but that doesn’t mean she’ll give up on a hot scoop. She might learn something intriguing and give Laura updates.

Then again, this might involve Charlotte (Scarlett Fernandez) and the bullying they hope is behind her. Laura’s involved in that story as well, so she’ll remain invested as Aiden’s (Jason David) heartbreaking saga continues to play out.

However, Laura will definitely remain concerned about “Kevin” and his bizarre behavior. She’ll resolve to do something about it, but she’ll need some help.

General Hospital spoilers say Laura will seek out Felicia (Kristina Wagner) and explain what she’s up against. She’ll feel like “Kevin” is really losing it, so she’ll push Felicia to pitch in on her plan. Laura may hope they can snap “Kevin” out of it if they work the right angle.

Meanwhile, Griffin (Matt Cohen) will have a hard time coping without Kiki (Hayley Erin). He’ll feel the loss more and more as the days pass without Kiki’s bright smile. Griffin’s heart may grow colder, so he’ll have to find a way to warm it back up eventually. Kiki wouldn’t want Griffin to let himself become bitter and broken.

Sonny (Maurice Benard) will also have a crucial chat with his right-hand man. Jason (Steve Burton) will make it clear that Carly’s (Laura Wright) on edge and won’t tolerate Sonny’s growing bond with Margaux (Elizabeth Hendrickson). She’ll bail if Sonny crosses the line, so Jason will warn him to steer clear of the DA.

As for Chase, he’ll do his best to pull Willow (Katelyn MacMullen) closer. It’ll be tough since Willow’s so emotionally distant, but Chase won’t give up. He really enjoys hanging out with Willow and would like to see where this could lead. Their next date will push them in a positive direction.

Other GH spoilers say Christmas will come a little late for Julian (William deVry). He won’t mind though! Some special holiday moments will fill Julian’s heart to the brim. It’ll be a nice break from all the stress over Ava’s (Maura West) grief and Kim’s (Tamara Braun) connection with Drew (Billy Miller).

Finally, a huge decision’s coming up for Kristina (Lexi Ainsworth). It’ll undoubtedly involve a bad one connected to the cult she’s fallen into! We’ll keep you posted as other General Hospital detail emerge. Stay tuned to ABC’s GH and don’t forget to check CDL often for the latest General Hospital spoilers, updates and news.