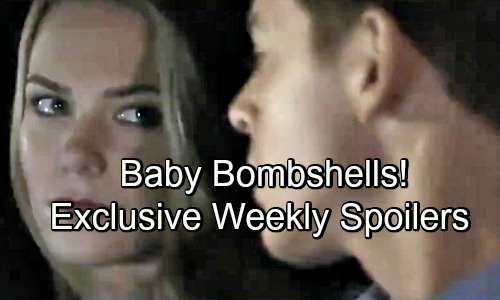 Carly should be saved from electroconvulsive therapy, but she’ll still battle confusion. She’s been hallucinating on all those drugs, so she may doubt that Jason’s even really there. Nevertheless, Jason will assure Carly that he’s going to protect her. He’ll do whatever it takes to keep his friend safe.

Once Jason calls Sam (Kelly Monaco), she’ll head over to Ferncliff with Curtis (Donnell Turner). General Hospital spoilers say they’ll pitch in somehow, so let’s hope they can get Jason off the hook for the gun incident. They’ve got PCPD connections, which could be important.

Sam might threaten to expose Ferncliff’s shady, over-the-top practices. She could suggest that things will go a lot better for everyone if Jason walks free and Carly’s treated fairly. Whatever the case, jail can never keep Jason down for long. Even if he ends up getting arrested, Diane (Carolyn Hennesy) could clear him in no time at all.

Over with Sonny (Maurice Benard), he’ll deal with some guilt. Michael (Chad Duell) and Nelle’s (Chloe Lanier) car crash will leave Sonny wishing he could’ve protected his son. Likewise, Chase (Josh Swickard) will put all the blame on himself. He’ll think the accident is his fault since Michael wouldn’t have been on the road otherwise.

Since Brad (Parry Shen) and the baby will likely be in the other car, GH fans can expect another side to this story. Lucas (Ryan Carnes) will be bewildered later, so that could be the result of this terrible news. We’ve got one adopted baby and one that’s set to be born, so the odds of both making it out alive are slim. General Hospital could be gearing up for a baby swap plot.

Elsewhere, Margaux (Elizabeth Hendrickson) will discover some intriguing information. Will it put her in Drew’s (Billy Miller) orbit again? She swiped the flash drive from the lost and found box, but she hasn’t given it to him yet. That seems like something Drew should get right away, so Margaux’s behavior is fishy. If she’s got a scheme in mind, perhaps the info she finds will fuel it.

Finally, Stella (Vernee Watson) will make a confession. She summoned Chandra for Curtis, but ended up changing her mind after a chat with Mike (Max Gail). It seems Chandra didn’t get the last message, so she may be making her way into town soon. If so, Stella will have to come clean and let Curtis know what she was up to. He isn’t going to be happy with his auntie!