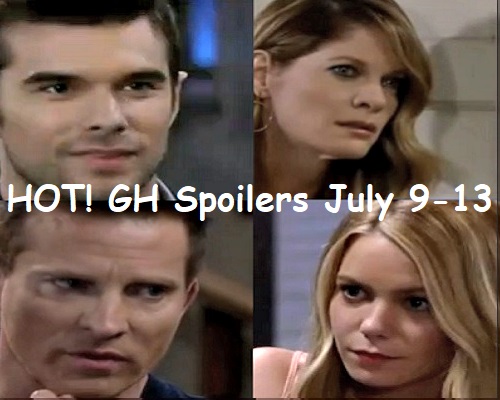 General Hospital (GH) spoilers for the week of July 9-13 tease that the drama will rev up in Port Charles. First, desperate Peter (Wes Ramsey) will make a vow. He’s not having any luck with Liesl (Kathleen Gati), so Nina (Michelle Stafford) may be the one who receives this promise.

Perhaps Peter will insist that if she lets him go, he’ll leave PC and become a man Nathan (Ryan Paevey) would be proud of. Then again, Peter may vow to face the consequences for his actions. At this point, they might be wearing him down enough for a full confession. Peter would say or do just about anything to score his freedom.

Thanks to some info from Wyatt (Patrick J. Gibbons, Franco (Roger Howarth) and Finn (Michael Easton) will grow suspicious. They’ll realize Dr. O could be holding someone hostage, so it shouldn’t be hard to put the clues together and determine that it’s Peter. Finn and Franco will work to find out more, but Liesl and Nina will work just as hard to avoid trouble!

Other General Hospital spoilers say Nelle (Chloe Lanier) will face some shockers and setbacks. Michael (Chad Duell) will deliver a few blows that leave Nelle uneasy. Since Chase (Josh Swickard) will be working with Michael, he may throw in a few of his own. Nelle will fear that her dreams could crumble, so she’ll take steps to prevent destruction.

Chase may prey on Nelle’s worries a little later. He’ll make a plea, so he might corner Nelle and suggest that they should be together. Chase may convince Nelle that things are doomed with Michael. He could encourage her to plot her “baby daddy’s” death and move on with him instead.

Over with Ava (Maura West), she’ll catch a whiff of Oscar’s (Garren Stitt) cologne. Ava will realize it’s the same kind Morgan (Bryan Craig) wore, so she may figure out that Nelle stole her bottle. She might determine that it somehow ended up in Josslyn’s (Eden McCoy) hands and finally, Oscar’s.

Ava should be miffed, but she’ll still be concerned about Nelle. Even Ava may sense that Nelle’s cushy Corinthos-Quartermaine plan is falling apart! Across town, GH spoilers state that Jason (Steve Burton) will reach out to Drew (Billy Miller). He’ll want to have a private conversation, so Sam’s (Kelly Monaco) name will undoubtedly be mentioned.

Will Jason confess that he’s going to make his move? He’s been incredibly patient, but Sam and Drew are divorced now. Maybe Jason’s ready to do a bit of wooing. If so, he might give Drew the heads-up. Then again, Jason’s world pretty much revolves around Carly (Laura Wright) right now. He’ll take help anywhere he can get it, so there might be something Drew can pitch in on.